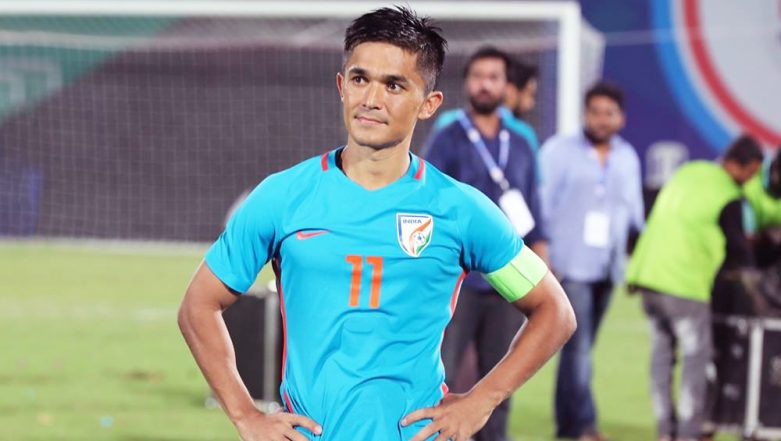 New Delhi, August 3: From captain to teammate to rival, and now the coach, India's football team assistant coach Shanmugam Venkatesh has played quite a few roles in current skipper Sunil Chhetri's professional career. In fact, it was under Venkatesh's captaincy that Chhetri had begun his international journey. With Chhetri celebrating his 34th birthday, Venkatesh spills some beans on one of India's favourite sons on the football pitch.

Excerpts from the interaction:

Q) You were the National team captain when Chhetri made his debut against Pakistan in 2005. What are your memories from the match?

Ans) I remember we were missing a number of regular players for the series, and it paved the way for a talented Sunil to get picked. We were playing in Pakistan, and that was an added pressure on everyone. I remember Sunil being tremendous on his debut. He even scored, and it was an indicator for things to come. Sunil Chhetri Beats Virat Kohli for Most ‘Retweeted Tweet’ of 2018! Footballer’s Call for Filling Stadium Shadows Virat-Anushka’s First Karwa Chauth Pic!

Q) How was Chhetri during his early days?

Ans) As a captain and teammate I travelled with him for 4-5 years. The younger faces in the team -- the likes of him, and Steven Dias were extremely naughty characters in the dressing room. He was such a chirpy guy. We used to have a lot of fun. But he was utmost serious when it came to his work. At the same time, we used to respect him and the other junior players as well. As a senior player, it is very important to guide and respect the youngsters as it motivates them to improve their performance and confidence.

Q) How much has Chhetri changed over the years?

Ans) In the last four years as the assistant coach, I have seen an entirely different face of Sunil. When we played together, the routines were different. We are now more comfortable discussing things. He has great knowledge of the game, and I have always respected his opinions and suggestions. After becoming the coach, I have noticed his seriousness, and concentration levels. For a player, it's very easy to lose concentration in the middle of a camp. But I have never seen this happen even once with Sunil.

Q) What was Chhetri's quality which has always stood out for you?

Ans) As a player, I tried to read the game situation, and the opponent in the first 10 minutes or so. Every opponent is different, and offers a different threat. Sunil has had this quality right from the very start. He has been adept at making the most of his strengths.

Q) You have played with legendary forwards such as I.M. Vijayan, Bhaichung Bhutia and Chhetri over the course of your career. How has your experience been with each of them?

Ans) I enjoyed playing with all three of them. Vijayan was a senior, and a unique kind of player. With him, we didn't have to even talk to communicate on the pitch. On the other hand, Bhaichung was a leader from the start. I played with him for 9-10 years and he was extremely aggressive. He used to be our target man in the penalty box.

Sunil played under my captainship, and we could see from the start that he had the potential to be a special player. It's hard to compare these players as each one of them has their own qualities that made them stand out. There were other strikers during this period as well who I respect deeply. But these three certainly were different from the lot."