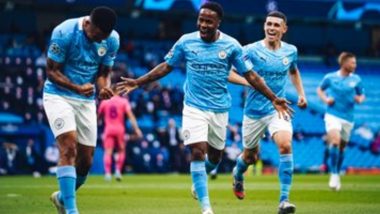 Manchester City will begin their Premier League 2020-21 campaign with an away trip to Wolves on September 22 (Tuesday). Manchester City vs Wolves match will take place at 12:45 am IST at the Molineux Stadium in Wolverhampton. While Pep Guardiola’s side begin their new season today, Wolves have already beaten Sheffield United 2-0 in the league and were knocked out by Stoke City in the second round of EFL Cup. Meanwhile, fans searching for live telecast and live streaming online details for WOL vs MCI EPL 2019-20 match should scroll down for all information including live streaming details on Hotstar and Star Sports. Sergio Aguero Injury Update: Manchester City Striker Could Miss the First Two Months of the Season, Feels Manager Pep Guardiola.

Wolves are looking to become the first side to beat Pep Guardiola’s side in three straight league matches. Nuno Espirito’s side beat City in both their Premier League meetings last season and will hope for a similar result this time. A win will make Wolves the fourth Premier League side after Manchester United 2234), Liverpool (2212) and Arsenal (2117) to win 2000 top-flight games. Guardiola's City are looking to become first Premier League team to win their opening match for 10 consecutive seasons.

Wolves vs Manchester City match in English Premier League 2020-21 will take place on September 22 (Monday midnight). The WOL vs MCI clash will be played at the Molineux Stadium and the match is scheduled to begin at 12:45 am IST (Indian Standard Time).

Where to Get Live Telecast of Wolves vs Manchester City, Premier League 2020-21 Football Match?

How to Get Free Live Streaming of Wolves vs Manchester City, Premier League 2020-21 Football Match?

Fans in India can also catch live action on online platforms. Disney+ Hotstar, the OTT platform of Star Network, will be live streaming the Wolves vs Manchester City match for its online fans in India. JIO and Airtel subscribers can also follow the game live on JIO TV and Airtel TV.

(The above story first appeared on LatestLY on Sep 21, 2020 06:49 PM IST. For more news and updates on politics, world, sports, entertainment and lifestyle, log on to our website latestly.com).