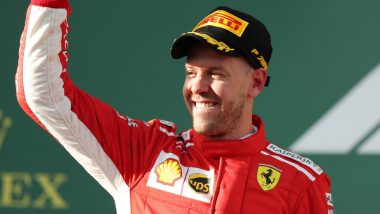 Born on July 3, 1987, Sebastian Vettel is one of the best racers of recent times and is considered to be one of the best racers in the history of the sport. The German racer who drives for Ferrari is currently holding a number of youngest records in Formula One. Vettel holds the record for the most consecutive race wins (9), as well as accumulating the third most race victories (53), podium finishes (120) and the fourth-most pole positions (57). Now as the German racer turns 33, let’s have a look at five lesser-known facts about the racer as he turns 33. Sebastian Vettel, Four-Time Formula One World Champion, to Leave Ferrari at End of Year After Contract Negotiations Break Down: Report.

That’s all we have for the article right now. If you think that we have missed out on any more interesting facts, please feel free to contribute in the Comments Section. Coming back to his birthday, the entire tea of Latestly.com wishes him a Very Happy Birthday.

(The above story first appeared on LatestLY on Jul 03, 2020 10:02 AM IST. For more news and updates on politics, world, sports, entertainment and lifestyle, log on to our website latestly.com).