Once Yusuf took the catch, reactions started pouring in on the Twitter. Yusuf’s younger Irfan also reacted to the catch. And, perhaps it was the best of the lot. 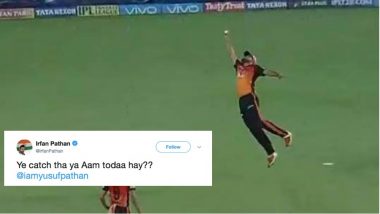 Yusuf Pathan took a sensational one-handed catch to dismiss Virat Kohli during the Indian Premier League 2018 (IPL 2018) match between Sunrisers Hyderabad (SRH) and Royal Challengers Bangalore (RCB) at the Rajiv Gandhi International Stadium in Hyderabad. In the 10th over of RCB’s chase, Kohli tried to pull Shakib al Hasan, but all he managed was a leading which flew to the short third-man area where Yusuf was fielding.

It looked like the ball will go over Yusuf’s head, but the big man timed his jump to perfection and plucked the ball from the air. What was impressive was that Yusuf took the catch one-handed. It was an important catch at that time as Kohli’s wicket derailed RCB chase and they eventually lost the match by five runs.

Once Yusuf took the catch, reactions started pouring in on the Twitter. Yusuf’s younger Irfan also reacted to the catch. And, perhaps it was the best of the lot. Irfan, who is quite active on social media, wrote: “Ye catch tha ya Aam todaa hay??” (Was that a catch or did you pluck a mango). To which, Yusuf replied, "Bachpan m itne aam tode hain humne sath m abtk adat nahi gayi." (We have plucked so many mangoes together in our childhood, that I am used to it)

Chasing 147, RCB were restricted to just 141. Meanwhile, this was RCB’s seventh defeat from ten matches. Their chances of qualification for playoffs looks slim as of now, but certainly not all over. RCB not only need to win their remaining matches, but bank on some other results as well to make it to the next round. SRH, on the other hand, continue to occupy the top spot on the IPL 2018 points table and look solid to make it to the playoffs. A win in next fixture should cement their place in the top four.

(The above story first appeared on LatestLY on May 08, 2018 04:11 PM IST. For more news and updates on politics, world, sports, entertainment and lifestyle, log on to our website latestly.com).