Cristiano Ronaldo is one happy man. Not just professionally but even personally. 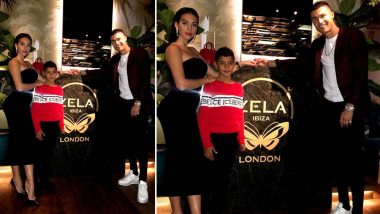 Cristiano Ronaldo is one happy man. Not just professionally but even personally. The football star has scored eight goals for Juventus and has been blazing guns. Personally, his relationship with Georgina Rodriguez has also made him happy and the couple is all set to tie the knot soon. Two days ago, the family celebrated the birthday of Ronaldo’s daughter Alana Martina, where he reportedly spent Rs 25 lakh for on two bottles of wine. Cristiano Ronaldo Engaged to Georgina Rodriguez; May Get Married Soon, Say Reports!

According to The Sun, CR7 spent 18,000 pounds on a bottle of Richebourg Grand Cru, which happens to be the world's most expensive wine before splashing more cash on a 1982 Pomerol Petrus, priced at 9,000 pounds. The newspaper further reported that the footballer was in a good mood and was in the restaurant for 15 minutes. The footballer even took to social media and wished his daughter by sharing the munchkin’s picture. Cristiano Ronaldo’s Picture in the Locker Room Photobombed by a Naked Juventus Teammate Giorgio Chiellini.

“Happy birthday, dear princess! One year of bliss! Love you!" he shared, along with a picture of her older twin siblings,” read the caption of the super cute snap.

Happy birthday, dear princess! One year of bliss! Love you!👏🏽🎂❤

He later shared the picture of the outing. In the snap we see the footballer having a great time with his girlfriend Georgina and his son Ronaldo Jr. The  picture was captioned, “About last night! Amazing dinner at @zelalondon 👌🏽🔝.

Ronaldo is currently in Poland playing the UEFA Champions League 2018. Juventus currently occupies the top spot at the Serie A table with 34 points. The 33-year-old is not a part of the Portugal squad after he was accused of rape by Kathryn Mayorga.

(The above story first appeared on LatestLY on Nov 16, 2018 05:04 PM IST. For more news and updates on politics, world, sports, entertainment and lifestyle, log on to our website latestly.com).