The quarterfinals, semifinals and final will be played on Sunday. amil Nadu, Uttar Pradesh, Goa, Services, Haryana, Chandigarh and Maharashtra qualified for the quarterfinals of the 69th Senior Men's National Kabaddi Championship 2022 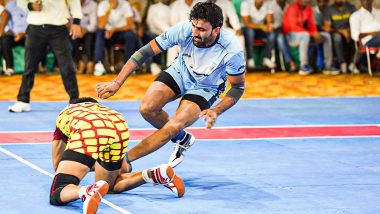 In the first match of the Round of 16-stage, Indian Railways defeated Punjab 49-30. Pro Kabaddi player Pawan Sehrawat was the top scorer of the match, scoring 12 raid points for Indian Railways. Men's National Kabaddi Championship 2022 Live Streaming Online: Get Telecast Details of 69th Edition of Senior Tournament in India.

In the second pre-quarterfinal match, Tamil Nadu pulled off a thrilling 33-27 win over Himachal Pradesh. Pro Kabaddi player Chandran Ranjit was the star of the show as he scored a total of 16 raid points to help his team Tamil Nadu to qualify for the quarterfinals of the competition.

Continuing his fine run of form, PKL superstar Rahul Chaudhari scored nine points to guide Uttar Pradesh to a comfortable 41-16 win over Delhi in their third Round of 16 match while Pro Kabaddi star Surender Gill's super 10 helped Goa beat Karnataka 40-27 in the fourth match in this stage.

Pro Kabaddi star Mohit Goyat single-handedly led hosts Haryana to a remarkable 48-34 win over Rajasthan. Mohit bagged 17 points in the match to help the home team seal a place in the quarterfinal stage of the competition.

Chandigarh edged past Bihar 57-48 in a thrilling pre-quarterfinal clash. Vijay (18 points) and Rakesh (17 points) led Chandigarh's charge as they combined to score a total of 35 raid points in the match.

In the last match of the day, Maharashtra defeated Kerala 48-30 to seal a place in the last-eight stage of the tournament.

The quarterfinals, semifinals and final will be played on Sunday.

(The above story first appeared on LatestLY on Jul 24, 2022 11:50 AM IST. For more news and updates on politics, world, sports, entertainment and lifestyle, log on to our website latestly.com).