The Anup Kumar-led Jaipur Pink Panthers were desperate for a win as they had entered the match after losing their last four games. 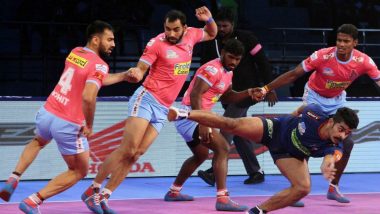 Jaipur Pink Panthers registered their second win in the ongoing sixth edition of the Pro Kabaddi League (PKL) after defeating Haryana Steelers 38-32. Jaipur's Deepak Hooda collected 12 raid points, while Haryana's Vikas Kandola bagged 10 points. The Anup Kumar-led Jaipur Pink Panthers were desperate for a win as they had entered the match after losing their last four games. The score was tied at 2-2 in the 2nd minute but regular mistakes by Haryana caused Jaipur to take the lead and inflict an All-Out in the 9th minute to make it 11-6 in their favour. You can watch full video highlights of the match here.

However, it looked like Vikas had other plans as he constantly bothered Jaipur's defence with regular bonus and touch points. Haryana made a comeback in the final minutes of the first half as they took a 16-13 lead. They then continued this form and inflicted an All-Out in the last raid of the half to make it 20-18 in their favour.

The second half saw Haryana continue with the positivity of the first half and dominate Jaipur as Kuldeep Singh got Anup with an ankle hold to make it 23-18 for Haryana in the 22nd minute. Pro Kabaddi League 2018-19 Schedule Timetable: Full Fixtures, All Teams' Match Dates, Timings, and Venue Details of PKL Season 6.

Jaipur stepped up to bring out a response and made the issue 20-23. Jaipur then blocked Haryana from running away with the lead as Nitin Rawal and Mohit Chhillar blocked Vikas near the midline after a failed ankle hold by Young Chang Ko in the 27th minute to make it 22-24.

Mohit continued to create problems for the Haryana raiders as he got a strong block on Mayur Shivtarkar to inflict another All-Out as Jaipur extended their lead to 28-25 in the 30th minute.

Jaipur then increased the lead slowly to 4 points by the 34th minute as Mohit got a double thigh hold on Monu Goyat and made it 32-28. Nitin continued to cause trouble for Haryana as he blocked Monu from returning to the midline and made it 34-30 for Jaipur. PKL 6 Complete Players List: Full Squads of All Pro Kabaddi League 2018 Teams.

Deepak got his first Super 10 of the season as he got a bonus point in the 38th minute and made the contest 35-30. Jaipur collected three points in the last two minutes, while their opponents could only manage two as the former clinched the issue 38-32.

(The above story first appeared on LatestLY on Nov 07, 2018 12:13 PM IST. For more news and updates on politics, world, sports, entertainment and lifestyle, log on to our website latestly.com).