VIVO PKL 2019: Pardeep Narwal, Ajay Thakur & Other Raiders to Watch Out for in the Seventh Season of Pro Kabaddi League

The seventh season of the Pro Kabaddi League (PKL) is all set to kick-off at the Gachibowli stadium here on Friday, and like every edition of the cash-rich league. On the verge of another title before going down in the knockouts. IANS takes a look at five raiders who are expected to take the mat by storm in PKL 7. 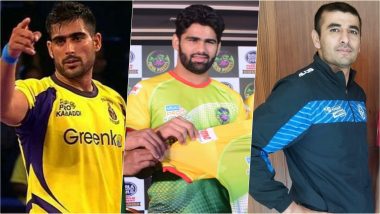 Raiders To Watch Out For in VIVO PKL 2019 (Photo Credits: IANS and Facebook)

Hyderabad, July 18 : The seventh season of the Pro Kabaddi League (PKL) is all set to kick-off at the Gachibowli stadium here on Friday, and like every edition of the cash-rich league, the coming season too will witness some of the players, be it a raider, defender or an all-rounder,  all will make an impact. VIVO PKL 2019 Schedule for Free PDF Download: Full Time Table With Match Timings and Venue Details of Pro Kabaddi League 7.

Talking about raiders, the last season saw Pawan Sehrawat's stunning raids help Bengaluru Bulls clinch the title, while Siddharth Desai, who had just made an entry into the league, became an overnight sensation as he took U Mumba on the verge of another title before going down in the knockouts. IANS takes a look at five raiders who are expected to take the mat by storm in PKL 7. PKL 2019 Time Table: Teams, Date and Match Timings, Venues, Online Stream & TV Telecast Details of VIVO Pro Kabaddi League.

The all-time leading scorer in PKL needs no introduction. A brilliant raider, Pardeep led Patna Pirates to title triumph in season four. Termed as the 'Dubki King', Pardeep is on the verge of adding another feather to his cap as he is just 42 raid points away from the 900 raid points mark. If he continues to trouble the opposition defenders like he has done so far, he could become the first man to reach the 1,000 raid points mark in PKL.

Hailing from a small village in Nashik district, Siddharth became to be known as the 'Poster boy of kabaddi' in just his first season. He made headlines as he was the most lethal weapon for U Mumba in Season 6. However, this season, Siddharth will feature for Telugu Titans, who spent a whopping Rs 1.45 crore on him. Titans will surely bank on Siddharth who won the 'best debutant' award last season with 218 points from 18 games.

The 'raid machine' scored 159 points from 21 games in season 6, which looks a bit average for a player of his stature. Termed as one of the fittest players not only in the league but also in the national team, Rahul could once again break even the best defence on the mat. Not to forget, this time he will be accompanied by Ajay Thakur, his team and India captain, who has shown time and again how to get better with time.

Any player or athlete wants to replicate his good shows and Pawan is not likely to be any different. He will aim to repeat his 'most valuable player' (MVP) winning show from last season. As defending champions Bengaluru Bulls will aim to lift a second consecutive title, a lot will rely on the shoulders of Pawan. Pawan had topped the charts for most points with 282 last season, of which 271 were his rading points.

Not only an experienced raider but also an inspiring leader, the India captain is known for singlehandedly winning matches for his side. He amassed 213 raid points in season five and followed it with 203 last year. With Rahul Chaudhari by his side, Thakur can take the Thalaivas right to the top.

(The above story first appeared on LatestLY on Jul 19, 2019 10:59 AM IST. For more news and updates on politics, world, sports, entertainment and lifestyle, log on to our website latestly.com).