Khabib Nurmagomedov's Father Abdulmanap Passes Away Due to COVID-19 Complications 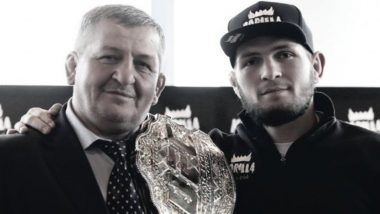 Khabib Nurmagomedov's father and trainer, Abdulmanap, passed away due to coronavirus complications on Friday at a Moscow hospital aged 57. According to a report in RT Sport, Abdulmanap suffered a heart attack after being diagnosed with coronavirus. He had fallen ill in late April and tested positive for the deadly virus after being treated at a military hospital in Moscow. Khabib Nurmagomedov's Never-Seen Wife a Mystery, Lesser Known Facts About UFC Lightweight Champion's Better Half.

"They managed to treat his heart, but not his brain, so he didn't emerge from a coma. The situation was too serious, it was already too late. The doctors did everything they could, they even tried to connect him with the President (Putin), but his condition was too serious."

My sincere and heartfelt condolences go out to the entire Nurmagomedov family and team during this terrible tragedy.#UFC pic.twitter.com/pHQR6d51Qc

Abdulmanap oversaw his son beat every opponent so far inside the octagon as Khabib currently holds a 28-0 record on the circuit. Khabib's father had also accompanied him during their meeting with Russian President Vladimir Putin after he beat Conor McGregor in 2018, which still remains one of the most watched fights in the history of the sport.

(The above story first appeared on LatestLY on Jul 03, 2020 07:22 PM IST. For more news and updates on politics, world, sports, entertainment and lifestyle, log on to our website latestly.com).