Catapulted into limelight after bagging a contract with Kolkata Knight Riders, Rinku Singh is hoping to follow the advice of his idol Suresh Raina and play freely when he makes his IPL debut for the two-time former champions. 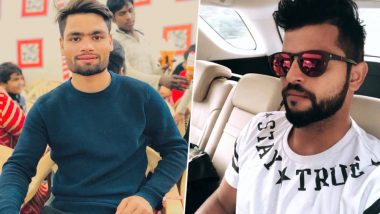 Catapulted into the limelight after bagging a contract with Kolkata Knight Riders, Rinku Singh is hoping to follow the advice of his idol Suresh Raina and play freely when he makes his IPL debut for the two-time former champions.

Rinku, who comes from a poor family in Aligarh, was picked by KKR for Rs 80 lakh, four times' higher than his base after an intense bidding war with Mumbai Indians.

While watching the bidding war from his small two-room house in an LPG company's godown where his father works as a delivery man, Rinku got a congratulatory message from Raina.

"It read 'bindaas khelna, jyada pressure mat lena', (play freely without taking any pressure). It was special for me," the KKR's left-handed batsman told PTI in an interview at the team hotel. "I never thought I will get Rs 80 lakh, I thought I would get about Rs 30-35 lakh."

The 20-year-old next received a pair of gloves and bat gifted by Raina during their first interaction on the sidelines of his domestic debut.

"He made surprise visit to my room which I was sharing with Ali Murtaza. I was awe-struck and could hardly utter anything," he said.

"There's a lot to learn from IPL. I've learnt a lot of shots, and I always followed Raina bhai. He's my idol. It was a dream moment to meet him ahead of my debut.

"Before I could speak about myself, my room partner told him that I consider him as his idol. I told him I am also a left-handed batsman. He soon gifted me the bat and gloves."

Rinku says he loves Raina's inside out shot. "Soon we bonded well, spoke a lot about the game. I asked him about IPL, the batting and fielding. I love his inside out shot, that's my favourite."

From becoming the talk of the town in Aligarh, Rinku's life has changed for the better since the auctions in January. From their temporary accommodation in the LPG godown, Rinku's family is now moving to a new house.

"We will soon move to a brand new house, finishing touches are being given now. It will be ready within two months," the 20-year-old said.

"I'm the first from Aligarh to play for IPL. The cricket craze has now increased. Those who did not practice are taking the sport seriously now."

Third of a five siblings including a sister, Rinku has gone through a lot of ordeals but he never stopped playing cricket.

His brother had once taken him to offer the job of a domestic worker involving sweeping and mopping but he ran away to pursue his dream in cricket.

A 32-ball 54 by the left-hander during an inter-school tournament when he was in standard eight made him a "hot property" in Aligarh.

He also won a motorcycle with a man-of-the-series award in a tournament in Delhi as the vehicle was soon used to deliver the cylinders by his father across Aligarh.

Rinku then came under the tutelage of Masood Amin, while Mohammad Zeeshan bhai and uncle Suresh Sharma played a major role in him playing for Uttar Pradesh.

"I wasted two season, not knowing what's the way till Masood sir showed me the way," he said, recalling the U-16 trials in 2012.

In nine Ranji Trophy games, Rinku has scored 692 runs with an average of 49 while last season, Kings XI Punjab hired him.

Rinku, however, ended up warming the bench and his moment of reckoning came during a trial for Mumbai Indians.

"I scored 91 runs in 31 balls. Maybe I came under the notice after that," he recalls citing about the bidding war between MI and KKR.

Rinku has bonded well with his teammates and says he is now looking forward to make debut for KKR.

"The preparation is going great guns. I'm practising well, and I know most of the U-19 players, all are good friends. I try to back myself and play freely under a pressure situation," he signed off.