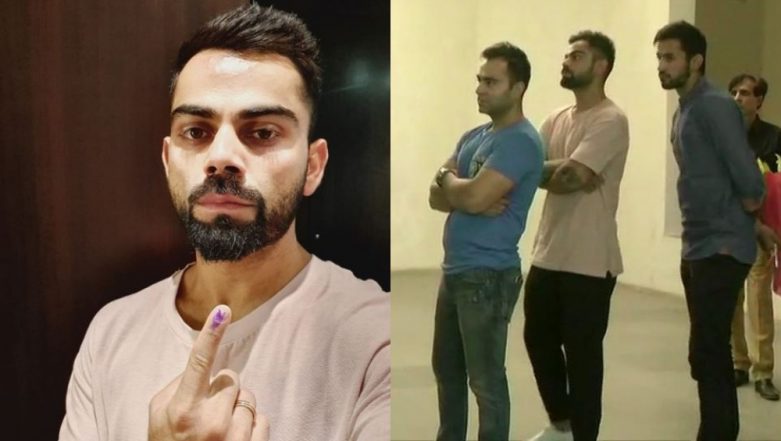 The sixth phase of the 2019 Lok Sabha Elections is taking place in 59 constituencies across seven states. The voting began today (May 12) morning at 7 am and many celebs, personalities from various fields, commoners have stepped out to cast their votes. Indian Cricket team captain Virat Kohli casts vote in Gurugram, appeals citizens for a high turnout. Gurgaon Lok Sabha Constituency in Haryana: Candidates, Current MP, Voting Date And Election Results 2019.

We have seen many celebrities casting their vote and sharing it on social media platform which motivates their fans to step out from their home and vote. The indeed give out a message that voting day is not a holiday to be enjoyed and people should take up this responsibility in help forming the perfect democratic government. A few days back we have seen cricketers and other famous sports personalities like Sachin Tendulkar, Anil Kumble, Jwala Gutta and Rohan Bopanna cast their vote and share their picture with a perfect caption on social media. Haryana Lok Sabha Elections 2019: Phase 6 Voting Begins in Ambala, Sonipat, Kurukshetra, Gurgaon and 7 Other Parliamentary Constituencies.

Haryana: Team India Captain Virat Kohli after casting his vote at a polling booth in Pinecrest School in Gurugram pic.twitter.com/z3vzJvxWSp

Voting is your right and responsibility towards nation building. Go vote.

Virat Kohli caption voting is our right and responsibility towards nation!!!

The 17th Lok Sabha elections is taking place throughout India, the voting is being done in 7 phases which have started from April 11, 2019. Polling for five phases has already been done and currently, 6th phase voting is taking place. The next and final phase of election will be held on May 19, 2019, and the result for all phases will be declared on May 23, 2019.