The tickets for Puneri Paltan's Home games in the Pro Kabaddi League 2018 have been announced for online sale on BookMyShow and team's official website. 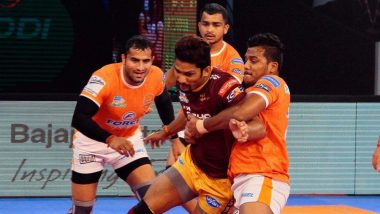 Puneri Paltan will be eying their maiden PKL title this season (Photo: prokabaddi.com)

The tickets can be obtained from BookMyShow and the franchise's official website. The offline ticket sales counter will start their sales two days prior to the beginning of the matches at the Shree Shiv Chhatrapati Sports Complex, according to a statement.  Puneri Paltan Team in Pro Kabaddi League 2018: List of All Players Bought by Pune Franchise for VIVO PKL 6.

The first match in the home leg will be against Gujarat Fortune Giants. Commenting on the occasion, CEO of Puneri Paltan Kailash Kandpal said: "We are privileged that we have such strong fan base who turn up in the stadium, in huge numbers, season after season. Pro Kabaddi League: Sixth Season of PKL to Start on October 7.

"Puneri Paltan is 'their' team and we are a family of 1 million plus and growing. Last season, all the matches in Pune were houseful. "We recognise their love and thank them for the unrivalled and solid support. As Vivo PKL has grown bigger and grander, the Paltan's home matches would be one of the major sporting events that Pune would witness this year," he added. The sixth edition of the league will begin from October 7 in Chennai.

(The above story first appeared on LatestLY on Sep 18, 2018 11:58 AM IST. For more news and updates on politics, world, sports, entertainment and lifestyle, log on to our website latestly.com).