Puneri Paltan vs U Mumba, PKL 2018-19 Match Live Streaming and Telecast Details: When and Where To Watch Pro Kabaddi League Season 6 Match Online on Hotstar and TV?

The Pro Kabbadi League 2018 is the second most watched sport in India after cricket. 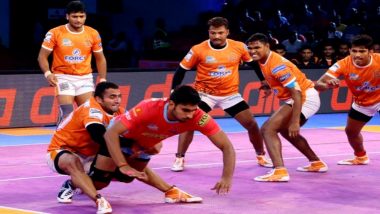 The Pro Kabbadi League 2018 is the second most watched sport in India after cricket. The match between Puneri Paltan vs U Mumba of the PKL 6 at the Jawaharlal Nehru Indoor stadium in Chennai. Going by the last season i.e. PKL 5, Pune had beaten Mumbai in all the three matches. However, when it comes to the head-to-head record Mumbai leads in the battle defeating Pune in 7 out of 11 matches. Both teams have had great defenders in the history of Pro Kabbadi League.

Fazel Atrachali and Dharamaraj Cheralathan for U Mumba and Sandeep Narwal and Girish Ernak for Puneri Paltan for Puneri Paltan have been the most successful defenders. Both teams would want to start off the tournament on a winning note. One hand where U Mumba has clinched the title once, Pune have reached the playoffs but haven’t been able to take a final leap. Fans of Puneri Paltan will have their hopes pinned up on Nitin Tomar who is the third most expensive player in the auction. However, Tomar has struggled to do well against Mumba as his average raid points and raid strike rate of 4.4 and 39 respectively. Pro Kabaddi League 2018-19 Schedule Timetable: Full Fixtures, All Teams' Match Dates, Timings, and Venue Details of PKL Season 6.

On other the hand, U Mumba would want to fill in the gap of Anup Kumar and Kashiling Adake. Kumar who has been the most successful captain for the side has gone to Jaipur Pink Panthers. Whereas, Adake is now sold to Bengaluru Bulls. Out of the five seasons, Kumar has lead the team thrice in the finals and once won the title. Coming back to the exciting contest, let’s check out the streaming details of the match.  PKL 6 Complete Players List: Full Squads of All Pro Kabaddi League 2018 Teams.

When to watch Puneri Paltan vs U Mumba, PKL 2018-19 match on TV? Know Date, Timings, and Venue of the 2nd match of Pro Kabaddi League, Season 6 here:

The 2nd match of the Pro Kabaddi League (Season 6) will take place on October 07. The match is scheduled to begin at 09.00 pm (IST) and will be competing at Jawaharlal Nehru Indoor Stadium, in Chennai.

When to watch live Telecast of Puneri Paltan vs U Mumba, PKL 2018-19 match on TV? Know Date, Timings, and Venue of 1st match of Pro Kabaddi League, Season 6 here:

Where to watch online streaming of Puneri Paltan vs U Mumba, PKL 2018-19 match in India?

(The above story first appeared on LatestLY on Oct 07, 2018 08:24 PM IST. For more news and updates on politics, world, sports, entertainment and lifestyle, log on to our website latestly.com).