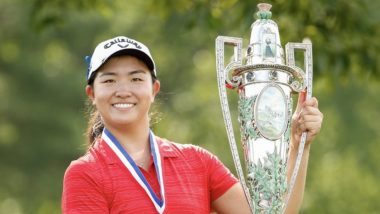 Rockville , August 10: Rose Zhang thought she might need to withdraw from the U.S. Women's Amateur because of a left wrist injury. Instead, she didn't play for 10 days to have her best chance. It turned out to be a winning decision.

Zhang won the longest U.S. Women's Amateur title match in 54 years, denying Gabriela Ruffels a repeat victory Sunday when the 20-year-old Australia missed a 3-foot par putt on the 38th hole. "To have my name on the trophy with the best players of all-time is life-changing for me," Zhang said. "It's a dream come true."

Neither player led by more than 2 up the entire 36-hole match, and they halved the last five holes with par to force extra holes for the first time since 2001. Zhang, a 17-year-old Californian who has committed to play at Stanford next year, sent it to overtime with a clutch flop-and-run from the rough 95 yards away on the 18th hole to tap-in range.

On the first extra hole, Zhang missed about a 12-foot putt for the win. On the 38th hole, Ruffels went just beyond the green from the rough and hit a good pitch to about 3 feet. Zhang missed her birdie putt, and then Ruffels' par putt to extend the match spun around the cup.

"You can't take any putt for granted out here," Ruffels said. "These greens are crazy fast, and that did have a little break to it. I was playing it outside of the hole. I actually hit it on my line, but it was heartbreaking to see it horseshoe out."

Ruffels, who plays at USC, was trying to become the first back-to-back winner of the U.S. Women's Amateur since Danielle Kang in 2011. Ruffels, who trailed early in all her matches leading to the final, this time built a 2-up lead through three holes, only for Zhang to quickly rally. The match was particularly wild toward the end of the first 18 holes.

Ruffels won the 18th to cut the deficit to 1 down. That was part of an eight-hole stretch in which only two holes were halved. Ruffels made an 8-foot birdie on the par-3 13th in the afternoon to square the match for the last time until Zhang won it with par on the 38th hole.

"Today was a very long 38 holes," Zhang said. "In the middle of the round, my wrist was feeling weird, so I tried to stretch it out as much as I could before going to the next shot that I had. I don't think that my wrist was too much of a hindrance, but it definitely was in the back of my mind."

It was the second-longest championship match since the U.S. Women's Amateur started match play in 1896. The record was 41 holes in 1966, when JoAnne Gunderson beat Marlene Stewart Streit, who both are in the World Golf Hall of Fame.