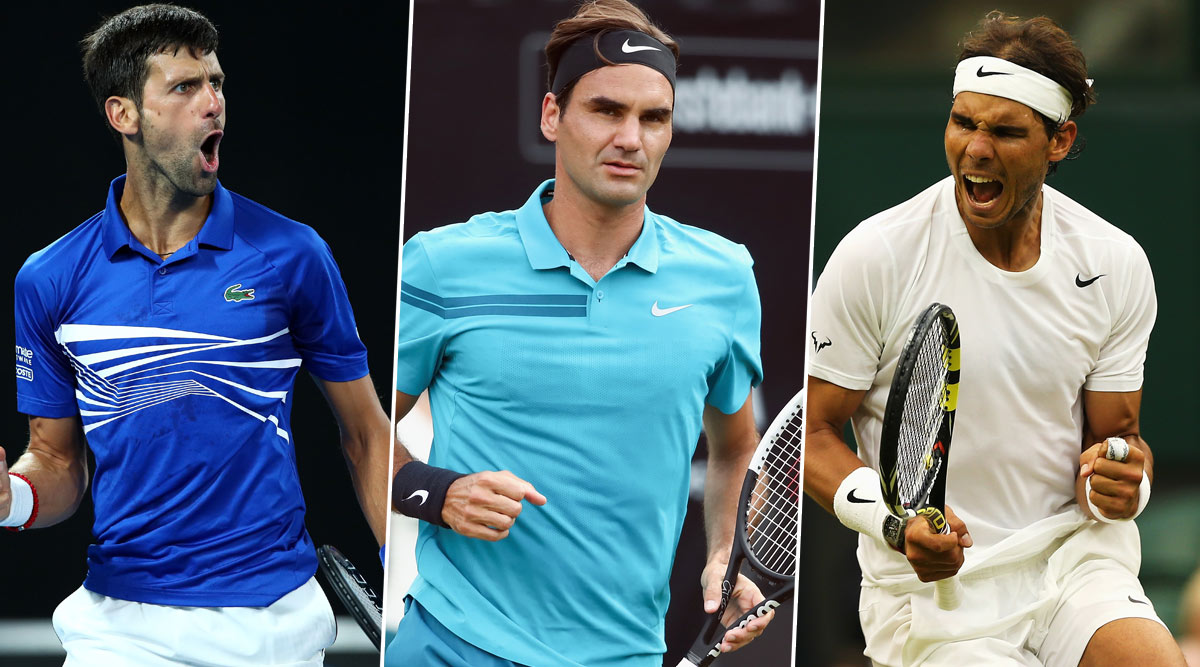 They are greatest rivals in tennis courts and are each other’s biggest competitors in Grand Slams, but off-court Novak Djokovic, Roger Federer and Rafael Nadal share a great rapport with each other and even have a common WhatsApp group between them. Part of the “big three” in tennis, Djokovic recently beat Dominic Thiem to clinch his eighth Australian Open title – the most by any tennis player at the Rod Laver Arena. The “big three” of Djokovic, Federer and Nadal have won a total of 56 Grand Slams together and have together dominated the tennis circuit like no other trio before. But despite their rivalry, all three share a great friendship between them. Novak Djokovic Credits His Success in Tennis to Plant-Based Diet; Here's How Vegan Foods Can Affect the Performance of an Athlete.

Djokovic, who is currently participating at the 2020 Dubai Open Tennis Championship, spoke to the tournament organisers a day prior to his round of 32 match where he confirmed the existence of a common WhatsApp group between Djokovic, Federer and Nadal. “WhatsApp group, yeah we do,” said Djokovic in the interview. “We are all active, and we are not active as well.”

“When we are active, everybody responds. We got it, we get along very well, I think we know, there is tremendous respect for each other, privately and professionally. As long as this is the case, everybody benefits from that and the sport as well,” the 17-time Grand Slam champion added.

Djokovic, World No 1 in men’s tennis, however, stopped short of revealing the name of the WhatsApp group he shares with the Spaniard and the Swiss maestro. Despite their rivalry and competitiveness on the court, all three (Djokovic, Nadal and Federer) have been supportive of each other off court. All three have always supported and played charity matches to help out each other’s academies and for each other’s cause.

Meanwhile, the recently crowned Australian Open champion also spoke out his astonishment in finding out about his friend and rival Federer’s right knee surgery. Federer has been ruled out till June after undergoing arthroscopic surgery on his right knee.

“It was a surprise to hear about Federer’s injury and surgery. I knew he was struggling with an injury in the Australian Open. But I think no one knew what the injury is and how serious it is. I don’t like to see anybody going through a process of surgery. Roger is Roger. This sport needs him,” Djokovic added. He will face Tunisia’s Malek Jaziri in his first match at the Dubai Open Championship.