Several players and coaches have expressed worries about how most players ranked before the top 100 or even the top 50 of the world rankings will be able to sustain their careers with no matches or tournaments. 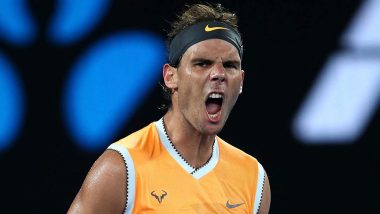 Madrid, April 19: Rafael Nadal's academy in Mallorca said in a statement that it is planning to reach out to other professional players in the WTA and ATP circuit amid the coronavirus pandemic that has frozen tennis action around the world.

Several players and coaches have expressed worries about how most players ranked before the top 100 or even the top 50 of the world rankings will be able to sustain their careers with no matches or tournaments. Rafael Nadal Says He Doesn’t Expect Any Tournaments to Happen in Near Future.

"Right now tennis takes back seat and the most important thing is everyone's health, but if in the coming months the Academy can be used to help other professional players, I'd be delighted if they could come to train and also to compete," said Nadal in the academy's release.

"Although we have no upcoming tournaments, I think competing among ourselves would help us maintain our game when the tour restarts."

The proposal would see the academy "possibly become a campus where elite players can reside, train and compete between themselves in matches that will be televised so that fans around the world can enjoy them."

Nadal had earlier said that he is not worried about the resumption of the tour and does not expect it to restart any time soon. Rafael Nadal Requests Donations From Spanish Athletes to Raise 11 Million for Coronavirus Victims.

"Tennis is not like football, our sport involves more travelling. Until there is a cure, the situation will be really complicated. We need to be responsible. I cannot see an official tournament at short or medium-term," he said.

(The above story first appeared on LatestLY on Apr 19, 2020 04:54 PM IST. For more news and updates on politics, world, sports, entertainment and lifestyle, log on to our website latestly.com).