Federer had walked out as the winner the last time these two had squared off against each other in the quarter-finals of Indian Wells in 2019. 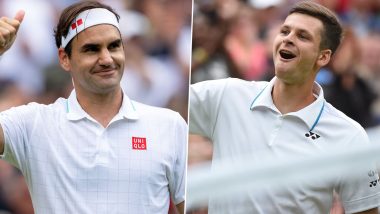 Roger Federer would lock horns against Hubert Hurkacz in the quarter-finals of Wimbledon 2021. The match would be held at the Centre Court on July 7 and would begin at 08:00 PM IST (Indian Standard Time). Federer, an ageless ambassador of the game has once again set his sights on the top prize, a record 21st Grand Slam. Standing in his way of securing a last-four berth is Hurkacz, who played out a thrilling five-set match against Daniil Medvedev to reach the quarters. This is his first-ever appearance in a semi-final of a Grand Slam, having never gone past the second-round in the past.

On the other hand, Federer would play his 58th major quarter-final. Emma Raducanu Posts Heartfelt Message for Fans After She Was Forced to Retire Due to Medical Reasons During her Wimbledon 2021 Match Against Alja Tomljanovic

Federer had walked out as the winner the last time these two had squared off against each other in the quarter-finals of Indian Wells in 2019. Hurkacz would have to battle hard and strong to dismiss Federer. Check out the live streaming details of this match:

What is the Date, Time, Schedule and Venue of Wimbledon 2021 Roger Federer vs Hubert Hurkacz Men's Singles Round of Quarterfinal?

Roger Federer vs Hubert Hurkacz Quarterfinal in Wimbledon 2021 will take place on July 07, 2021 (Wednesday). The match will be played on Centre Court and has a tentative start time of 08:00 pm IST (Indian Standard Time).

Where to Watch the Live Telecast Wimbledon 2021 Roger Federer vs Hubert Hurkacz Men's Singles Quarterfinal Match? Which TV Channel Will Broadcast it LIVE in India?

Where to Watch the Live Streaming of Roger Federer vs Hubert Hurkacz Men's Quarterfinal Match Online in India?

(The above story first appeared on LatestLY on Jul 07, 2021 06:44 PM IST. For more news and updates on politics, world, sports, entertainment and lifestyle, log on to our website latestly.com).