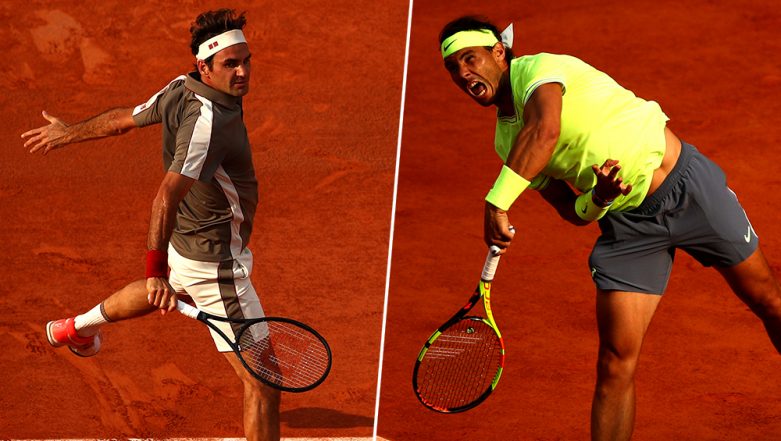 Swiss great Roger Federer and the King of Clay Rafael Nadal have set up a mouth-watering clash as the famous rivals take on each other in the semi-finals of French Open 2019. This will be the 39th meeting between Roger Federer and Rafael Nadal. Often dubbed as the greatest rivalry in the history of sports, the tennis greats are ready to fight another match and roll back the years at Roland Garros. Before the highly anticipated 'Fedal' clash, here's a look at the head to head (H2H) battle record featuring the Swiss Master and Spain's 'Raging Bull' Rafael Nadal.

Federer has won 20 Grand Slam titles, more than any other player in the history of men's singles tennis. Nadal, with his 17 Grand slams, is at the number two spot in the list and is only trailing his opponent of Friday's match. However, when it comes to the head to head battles, Nadal leads Federer 23-15 on all surfaces. Nadal is even more dominating on clay, and has beaten Federer five times at Roland Garros even when the Swiss maestro was at the peak of his powers in 2006 and 2007.

But Federer has seen a late resurgence in form against Nadal and dominated the past few meetings between the legends. Here's a look at how the last five matches panned out between the two modern greats in tennis and arguably the great rivalry in sports.

The most recent match between Roger Federer and Rafael Nadal turned out to be no match, as the 17 time Grand Slam champion Nadal could not play due to an injury and Federer got a walk-over in the 2019 ATP Masters 1000 Indian Wells CA in USA, Outdoor Hard court event.

In the 2017 ATP Masters 1000 Shanghai, China, Roger Federer won the match comfortably. against Nadal. The Swiss maestro beat the Spaniard 6/4, 6/3 in the final of the Outdoor Hard court.

Federer and Nadal set up an exciting final at the 2017 ATP Masters 1000 Miami FL, in USA. However, Federer won the match comfortably as he trounced Nadal 6/3, 6/4 on the Outdoor Hard court.

The last time Roger Federer and Rafael Nadal met at a Grand Slam was in the 2017 Australian Open. The rivals produced a memorable match, as Federer won the five-set thriller 6/4, 3/6, 6/1, 3/6, 6/3 at the final of the Outdoor Hard court Grand Slam.

As can be seen from the above record, Roger Federer has beaten Nadal in their last five clashes and got a walk-over in one of the meetings. In fact, Rafael Nadal last defeated Federer in the 2014 Australian Open semi-final by 7/6(4), 6/3, 6/3. Therefore, the Friday's contest between Federer and Nadal in the semi-finals of the French Open 2019 assumes greater significance as Nadal has to prove a point against Federer of late. The 2019 French Open is also the first Grand Slam since the 2012 French Open where the Big Three- namely Roger Federer, Rafael Nadal and Novak Djokovic, have made it to the semi-finals of a Grand Slam together.