Serena Williams Birthday Special: 11 Lesser-Known Facts About Tennis Legend You Should Know As She Turns 41

Born in Michigan, USA, on September 26, 1981, the tennis legend was the most dominating woman to play the sport and has set many records in her career, quite a few seem to be unbreakable. 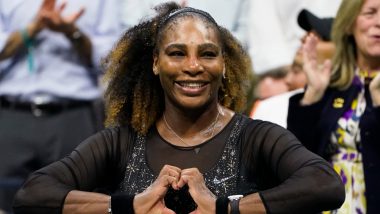 American tennis player Serena Williams is regarded as one of the greatest players ever to step foot on the field. She has 23 Grand Slams singles titles, more than any other man or woman in the Open era, and has ranked No. 1 in women’s singles for 319 weeks, including a joint record of 186 consecutive weeks. Serena dominated the game for almost about two decades, winning several titles and setting numerous records, but this came to an end in September 2022, as she played her last match at the US Open. Serena Williams Retires: A Look at American Tennis Legend's Major Achievements in her 26-Year Professional Career Following 2022 US Open Exit.

Born in Michigan, USA, on September 26, 1981, the tennis legend was the most dominating woman to play the sport and has set many records in her career, quite a few seem to be unbreakable. Coached by her father and playing alongside her sister in the doubles events the game had a very own feeling for her. The sisters have won a total of 14 Grand Slam doubles titles together in their careers.

The tennis legend will be celebrating her 41st birthday on September 26, 2022, so let’s take a look at some of the interesting facts about her

The Tennis icon announced her retirement earlier this year at US Open 2022 but has left the door open for a return. In a recent interview with Bradley Cooper. "I feel like if I want to come back, I definitely can still come back," she said.

(The above story first appeared on LatestLY on Sep 26, 2022 10:24 AM IST. For more news and updates on politics, world, sports, entertainment and lifestyle, log on to our website latestly.com).