American tennis ace Serena Williams is keen to play in her home Slam -- the US Open -- after the winner of 23 Grand Slam singles titles lost the three-hour long opening round Wimbledon Centre Court battle to Harmony Tan of France 7-5, 1-6, 7-6(7). 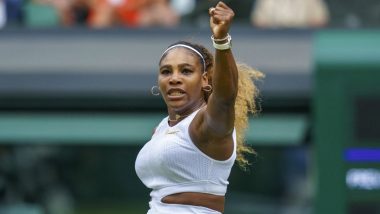 London, June 29 : American tennis ace Serena Williams is keen to play in her home Slam -- the US Open -- after the winner of 23 Grand Slam singles titles lost the three-hour long opening round Wimbledon Centre Court battle to Harmony Tan of France 7-5, 1-6, 7-6(7). In the longest match of the tournament so far, Tan twice came back from a break down in the third set to notch just the third Grand Slam main-draw win of her career. Serena Williams Out of Wimbledon 2022, Loses to Harmony Tan in a Three-Hour Contest.

"When you're at home, especially in New York, and the US Open, that being the first place I've won a Grand Slam, is something that's always super special," Williams was quoted as saying by wtatennis.com. "Your first time is always special. There's definitely lots of motivation to get better and to play at home," she added. Serena had returned to singles action for the first time in 12 months and Tuesday she was narrowly edged out by world No.115. Serena said the loss had motivated her to practice more ahead of the last Grand Slam of the season.

"It definitely makes me want to hit the practice courts because you're playing not bad and you're so close. Any other opponent probably would have suited my game better. So, yeah, I feel like that it's actually kind of like, 'OK, Serena, you can do this if you want.'" Serena made her return to competition in the week before Wimbledon at Eastbourne, where she played two doubles matches with world No.2 Ons Jabeur of Tunisia. Serena's progress was noticeable over the course of her 3-hour and 11-minute tussle with Tan. She showed glimpses of the form that has won her seven Wimbledon titles. But ultimately, it was the lack of match play that proved to be the difference in the match. Nick Kyrgios Spits At Spectator During Wimbledon 2022 Match vs Paul Jubb; Video Goes Viral..

"I think if you're playing week in, week out, or even every three weeks, every four weeks, there's a little bit more match toughness," Williams said. "But with that being said, I felt like I played pretty OK on some of 'em, not all of 'em. Maybe some key ones I definitely could have played better. "You got to think if I were playing matches I wouldn't miss some of those points or this match. There's definitely lots of motivation to get better and to play at home." Williams brushed aside questions about her future when asked if she had played her last Wimbledon. "That's a question I can't answer. Like, I don't know. Who knows? Who knows where I'll pop up. Like I said coming into this, I'm just planning for right now, seeing how I feel, just to go from there."

(The above story first appeared on LatestLY on Jun 29, 2022 03:46 PM IST. For more news and updates on politics, world, sports, entertainment and lifestyle, log on to our website latestly.com).