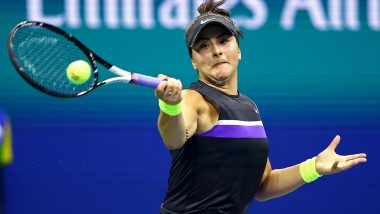 "After many discussions with those closest to me, I have made the difficult decision not to return to New York this year," Andreescu said in a statement posted on Twitter on Thursday. "I have taken this step in order to focus on my match fitness and ensure that I return ready to play at my highest level."

The US Open is currently scheduled to be held behind closed doors from August 31 to September 13 with the Cincinnati Open being held at the Flushing Meadows before that from August 22. However, due to rising COVID-19 cases in the country, tennis stars have been apprehensive about participating in the tournament.

"The US Open victory last year has been the high point of my career thus far and I will miss not being there," she continued. "However, I realise that the unforeseen challenges, including the COVID-19 pandemic, have compromised my ability to prepare and compete to the degree necessary to play at my highest level.

"I want to express my appreciation to the USTA and the WTA for all of their efforts in making the event happen. I look forward to joining my competitors back on court soon," the world No. 6 concluded.

World No.1 Ashleigh Barty, Svetlana Kuznetsova, Elina Svitolina and Kiki Bertens have already decided against playing in the US Open amid the COVID-19 pandemic.

(The above story first appeared on LatestLY on Aug 14, 2020 10:06 AM IST. For more news and updates on politics, world, sports, entertainment and lifestyle, log on to our website latestly.com).