Japanese tennis star Naomi Osaka will play her first event since the French Open when she competes at the Mubadala Silicon Valley Classic in San Jose, California early next month. 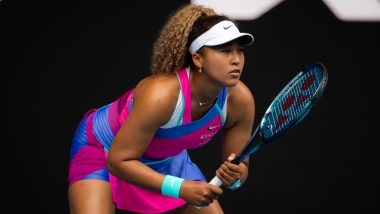 San Jose (California), July 19: Japanese tennis star Naomi Osaka will play her first event since the French Open when she competes at the Mubadala Silicon Valley Classic in San Jose, California early next month. The four-time major champion has received a wild card into a field that includes Wimbledon champion Elena Rybakina, world No.5 Ons Jabeur of Tunisia, American teenager Coco Gauff and 2019 US Open champion Bianca Andreescu. Serena Williams Set To Return to the National Bank Open 2022 in Toronto.

The Mubadala Silicon Valley Classic begins on August 1 at San Jose State University. With her wild-card entry, Osaka is set to return to where it all began. Osaka made her WTA main-draw debut at the tournament in 2014 when the event was held at Stanford University, according to wtatennis.com. Then 16, the No.406-ranked Osaka was an alternate into qualifying and successfully advanced to her first main draw. There, Osaka saved match point to power through Australia's Sam Stosur, 4-6, 7-6 (7), 7-5. This will be Osaka's first appearance since the event moved to San Jose. Daria Kasatkina, Russian Tennis Player, Says She is Dating a Woman.

"We are very excited to have Naomi Osaka returning to the Bay Area," tournament director Vickie Gunnarsson said. "She made her WTA debut at our event and watching her grow both on and off the court has been amazing." Gunnarsson added, "She is not only an incredible player but her commitment to equality and social change is truly inspiring." Co-founded by Billie Jean King, the tournament was the first event of the historic 1971 women's professional tennis tour, a precursor to the WTA. Created for women by women, the tournament's list of past champions includes the likes of Serena Williams, Lindsay Davenport, Billie Jean King, Chris Evert, Martina Navratilova, Andrea Jaeger, Monica Seles, Martina Hingis, Venus Williams and Kim Clijsters.

(The above story first appeared on LatestLY on Jul 19, 2022 12:52 PM IST. For more news and updates on politics, world, sports, entertainment and lifestyle, log on to our website latestly.com).