Former champion Simona Halep stunned No 4 seed Paula Badosa to storm into the women's singles quarterfinals at Wimbledon on Monday. 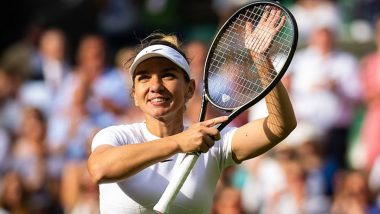 London, July 5: Former champion Simona Halep stunned No 4 seed Paula Badosa to storm into the women's singles quarterfinals at Wimbledon on Monday. Halep rolled past Badosa in a fourth-round match, losing only three games in the process and dominating her Spanish opponent from start to finish in a 6-1, 6-2 triumph at the Centre Court. Halep will face No.20 seed, Amanda Anisimova, in the quarterfinals. It was Halep's second emphatic result against Badosa this year; at the Mutua Madrid Open in May, Halep lost just four games against the then-No.2 seed on her home turf in a 6-3, 6-1 Round 2 victory. Wimbledon 2022 Day 8 Highlights: Top Results, Major Action From Tennis Tournament.

The first match between two Top 20 seeds at this Championships went squarely in favor of the former World No.1 Halep broke Badosa's serve five times in just 59 minutes on court, never lost her own, and hit 17 winners to just nine unforced errors. Badosa, playing another match on Centre Court after dispatching two-time former champion Petra Kvitova in Round 3, by contrast, never got going; she hit 20 unforced errors to just seven winners. Though it was her first match on Centre Court in more than 1,000 days, Halep was in fact back on the hallowed lawns on Sunday to celebrate the court's 100th anniversary, standing shoulder-to-shoulder with other great champions. Meanwhile, 20th seed Anisimova powered past France's Harmony Tan 6-2, 6-3 to book a place in her first quarterfinal at Wimbledon and first major quarterfinal since her run to the 2019 Roland Garros semifinals, said a report on the WTA Tour website. Wimbledon 2022: Nick Kyrgios Reaches Quarterfinals Beating American Brandon Nakashima After Early Scare.

The last American woman in the draw, Anisimova is now an impressive 29-9 on the season, the fourth-best record on the Hologic WTA Tour behind Iga Swiatek, Ons Jabeur, and Simona Halep. She backed up her tough three-set win over French Open finalist Coco Gauff by playing disciplined, powerful tennis to keep Tan at bay. Before this year, Wimbledon was the only Slam at which Anisimova had yet to reach the third round. Her best result was a second-round showing in 2019. "Going into this I didn't think this was possible," Anisimova said. "It's a dream come true right now," she said. Anisimova enjoyed her breakout run at a major at the 2019 French Open. Then 17, Anisimova notched wins over Tan and Halep en route to her first major semifinal.

(The above story first appeared on LatestLY on Jul 05, 2022 11:14 AM IST. For more news and updates on politics, world, sports, entertainment and lifestyle, log on to our website latestly.com).