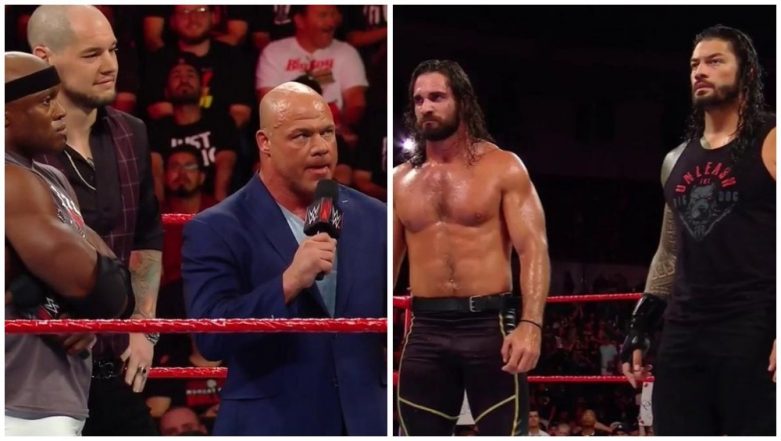 The latest episode of Monday Night Raw, on June 25, began with a tribute to for World Wrestling Entertainment (WWE) wrestler Leon White Vader. The former World Heavyweight Champion had passed away in the past week at the age of 63. The weekly show kicked-off with Raw General Manager Kurt Angle and Raw Constable Baron Corbin making some announcements. Angle brought up Paul Heyman’s Facebook post wherein he took potshots at Roman Reigns, Bobby Lashley, Kurt Angle and several other superstars.

The opening segment of the Monday Night Raw saw Lashley, Reigns and Angle engage in a verbal duel over Universal Championship title, which is currently held by Brock Lesnar. Angle mentions how contract negotiations with Lesnar have hit a roadblock and hence the multi-man match at next Pay-Per-View (PPV) Extreme Rules is on hold. However, the verbal duel between Lashley and Reigns hit a threshold, wherein Angle intervenes and makes a tag-team match instead.

There were quite a few exciting contests in the night. RAW Women’s Champion Alexa Bliss took on Natalya, wherein the latter won the match. The segment involving Braun Strowman, Kevin Owens, Finn Balor, and Baron Corbin was an intriguing watch too.

The Revival vs Roman Reigns and Bobby Lashley

The Authors of Pain vs Rich and Rex Gibson

The Authors of Pain

The Riott Squad vs Ember Moon, Sasha Banks and Bayley

No Way Jose vs Mojo Rawley

With so many exciting matches lined-up in the night, the main event was a show-stealer. The final match on Monday Night RAW saw Seth Rollins lock horns with Dolph Ziggler in his rematch for the Intercontinental Championship title. The gruelling contest saw both the wrestlers leaving no stone unturned to win the bout. Drew McIntyre, who was at ringside with Ziggler, regularly created distractions much to the annoyance of Rollins. However, it was McIntyre who interfered in the ending moments of the match as he pulled the referee out of the ring, causing disqualification.

After Rollins was declared a winner (by disqualification), both McIntyre and Ziggler double team to beat-up Rollins. Reigns came out to make the save amidst massive applause from the crowd. Both McIntyre and Ziggler retreat after the beating; Monday Night RAW goes off-air with Seth Rollins and Roman Reigns talking in the middle of the ring!