WWE News: From Dominik Mysterio Attacking Seth Rollins on Raw to Kairi Sane’s Thank You Message For Fans, Here Are Five Interesting Updates to Watch Out For 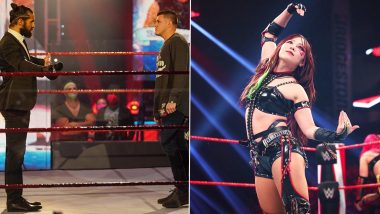 We just witnessed July 27, 2020 episode of Raw which was an amazing night for the heel wrestlers. Drew McIntyre after defeating Dolph Ziggler in Extreme Rules match on Raw got hit by the RKO by Randy Orton. Prior to that, at the beginning of the show, The Viper challenged him for a WWE Title match at SummerSlam 2020. Many fans got disappointed after Asuka was yet again defeated by Sasha Banks on Raw, thanks to Bayley, who forced former Raw Women's Champion to leave the ring and come in rescue of her friend Kairi Sane. We saw Rey Mysterio's son Dominik Mysterio attack Seth Rollins and Buddy Murphy by kendo sticks this past week on Raw. Scroll down below to read more about the latest happenings, news and updates from WWE. WWE Raw July 27, 2020 Results and Highlights: Randy Orton Challenges Drew McIntyre For Title Showdown at SummerSlam; Sasha Banks Defeats Asuka by Count-Out to Become Women’s Champion (View Pics)

Rey Mysterio's son Dominik Mysterio finally made his appearance on Raw this week as he confronted Seth Rollins. Monday Night Messiah offered Dominik peace, however, he did not accept it instead attacked Rollins. He was then joined by Aleister Black to beat down Seth Rollins and Buddy Murphy. When Rollins and Murphy were about to sacrifice Black's eye, Dominik came to the rescue and he delivered kendo stick strike on Monday Night Messiah and his disciples. WWE NXT July 22, 2020 Results and Highlights: Keith Lee Relinquishes North American Title; Karrion Kross Defeats Dominik Dijakovic to Continue His Winning Streak (View Pics)

Aleister Black was a star in NXT where he has also held the NXT World Title. Black is currently in rivalry with Seth Rollins as he always comes in aid for Rey Mysterio and Dominik. When Paul Heyman was writing the script for Raw, he simply loved this Dutch wrestler. However, Sportkeeda claims that Vince McMahon is currently not convinced with Aleister Black's skillset and has a mixed feeling about the wrestler. The chairman of WWE feels that Aleister Black is lacking something to be on the main roster like Raw. WWE News: From Edge & Daniel Bryan Joining Writing Team to The Miz Speaking About His Retirement, Here Are Five Interesting Updates You Need to Know.

WWE and Kairi Sane has officially confirmed that Kairi Sane has bid adieu to wrestle. The WWE diva is leaving the company on good terms as she wants to go back to Japan and spend time with her husband. Kairi Sane defeated Bayley in her last match which took place on Raw July 20, 2020 episode. As per the storyline, she was attacked on this week's episode by Bayley at the backstage area, which forced her best friend Asuka to leave the ring and come to her rescue. This lead to Sasha Banks victory by count-out.

I was able to accomplish so much in the last three years, but it wasn’t because of my ability or my strength. It was because of all of the constant, warm support from the fans. I am so thankful I could meet you all.

Thank you from the bottom of my heart,

4. Sasha Banks Says July 27 Will No Longer Be Remembered For Triple H Birthday

Triple H has his birthday on July 27, which is indeed a special day for WWE fans. Sasha Banks after winning Raw Women's Champion on July 27, 2020 episode of Raw said that Triple H birthday's celebration has been cancelled due to her title win. The Legit Boss then went on to take a dig at Triple H by saying that henceforth July 27 will be remembered for '2 Beltz Banks' and the day when Legit CEO took over the entire company.

BREAKING: HHH’s birthday is officially cancelled. Moving forward July 27th will now be known as #2BeltzBanks day! The day the #LegitCEO took over the entire company! Run me my check 🗣 pic.twitter.com/ChalAG7OWh

The upcoming episode of WWE NXT ON July 29, 2020, will feature a big match between Shotzi Blackheart and Mercedes Martinez. The announcement was made by William Regal just one hour prior to the commencement of Raw. Regal also mentioned in his tweet that Keith Lee will address Karrion Kross in the coming episode of the black and gold brand of WWE. Kross defeated Dominik Kijakovic in the last week episode of NXT.

Putting on my big boy pants for this one! Welcome to the BALLPIT Mercedes! @WWENXT https://t.co/2x1OF45QLS

(The above story first appeared on LatestLY on Jul 29, 2020 09:01 AM IST. For more news and updates on politics, world, sports, entertainment and lifestyle, log on to our website latestly.com).