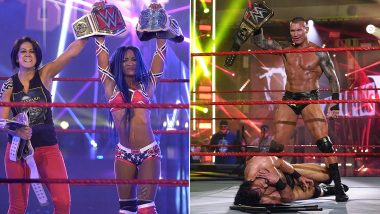 WWE Raw July 27, 2020 episode took place at Performance Center in Orlando, Florida. The show was kicked off by Randy Orton addressing the crowd. He boasted of his power in WWE and said that he could do anything or whatever he wants to do as per his wish. The Viper seems to have gained more confidence after taking out Big Show last week on Raw. Orton wishes to have WWE title belt around his waist and therefore he challenged Drew McIntyre for title showdown at SummerSlam. Sasha Banks manages to walk out with Raw Women's Championship belt as she defeats Asuka by count-out. Meanwhile, you have arrived at the right page, if you are looking for WWE Raw July 27, 2020 results and highlights. WWE Raw July 20, 2020 Results and Highlights: Randy Orton Defeats Big Show; Stephanie McMahon Announces Extreme Rules Women’s Title Rematch Between Asuka & Sasha Banks (View Pics)

Drew McIntyre faced Dolph Ziggler for WWE Championship on Raw and Scottish Psychopath set the stipulation as Extreme Rules match. McIntyre won this match by giving claymore kick to Ziggler, thereby pinning him to the count of three. However, prior to that, he was put through the table by Heel Ziggler and went through other brutality during the match. WWE News: From Edge & Daniel Bryan Joining Writing Team to The Miz Speaking About His Retirement, Here Are Five Interesting Updates You Need to Know.

Speaking about Sasha Banks victory, The Legit Boss was yet again helped by her best friend Bayley. The SmackDown women's champion was of course not allowed to interfere during the match, as mentioned by Stephanie McMahon last week. However, Bayley attacked Kairi Sane brutally at the backstage area, which forced Asuka to leave the ring and rescue her close friend. This lead to Asuka getting defeated by count-out. It must also be noted that Kairi Sane has bid farewell to WWE, as she is travelling back to Japan to spent time with her husband. WWE SmackDown July 24, 2020 Results and Highlights: Bray Wyatt Returns With FireFly Fun House, Jeff Hardy Defeats Sheamus in Bar Fight (View Pics)

We saw Dominik Mysterio confront Seth Rollins on Raw, where he displayed his aggressive side in a good way. Dominik attacked Rollins, however, was put down initially by Buddy Murphy and Monday Night Messiah near the ringside barricade. We then saw Aleister Black come to the rescue of Dominik. Black was then taken down by Murphy and Rollins and they almost took his eyes away, but Dominik came at the right time and gave some kendo stick strikes to Rollins and Murphy thereby saving Black's eye.

Randy Orton With RKO Out of Nowhere

After @dmcintyrewwe picked up the win over @heelziggler, he may have been given a glimpse into the future courtesy of @randyorton! #WWERaw

BREAKING: HHH’s birthday is officially cancelled. Moving forward July 27th will now be known as #2BeltzBanks day! The day the #LegitCEO took over the entire company! Run me my check 🗣 pic.twitter.com/ChalAG7OWh

Shayna Baszler & Nia Jax Gets Into a Brawl

Angel Garza and Andrade earned Raw Tag Team Titles match against Street Profits as they defeated The Viking Raiders and Ricochet & Cedric Alexander in a triple-threat tag team match. It will be interesting to see how Drew McIntyre defends his title against Randy Orton at SummerSlam 2020. Stay tuned with LatestLY for more updates and news from WWE.

(The above story first appeared on LatestLY on Jul 28, 2020 10:50 AM IST. For more news and updates on politics, world, sports, entertainment and lifestyle, log on to our website latestly.com).