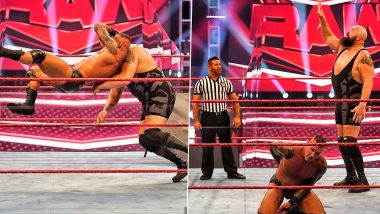 WWE Raw July 20, 2020 episode took place at Performance Center in Orlando, Florida. There were lots of questions in the mind of fans after the conclusion of Extreme Rules 2020 last night. Stephanie McMahon appeared on Monday Night Raw this week and made a huge announcement for Sasha Banks vs Asuka Raw Women's Championship Extreme Rules rematch. Stephanie also cleared that neither The Legit Boss nor Asuka won the match at Extreme Rules 2020.  In the main event of Raw this week, we witnessed Randy Orton square off against Big Show in an unsanctioned match. The Viper won the match and thereby continues his winning streak on Raw. WWE Raw July 13, 2020 Results and Highlights: Kevin Owens Defeats Seth Rollins in WrestleMania 36 Rematch; Shayna Baszler & Bianca Belair Return to Monday Night (View Pics)

Bayley played a big role in Sasha Banks vs Asuka title match at Extreme Rules, as she wore the referee jersey to make the pin count. Asuka's friend Kairi Sane wanted to teach SmackDown Women's champion a lesson and she did so by defeating Bayley in a non-title match. It must also be noted that Stephanie has mentioned that if Bayley interferes in Sasha Banks vs Asuka Raw Women's Championship match next week on Raw, The Legit Boss will be disqualified and ripped off the title. Speaking about Randy Orton, yet again he took out one more WWE legend as after the victory he hit Big Show with a punt kick. WWE Extreme Rules 2020 Results And Highlights: Drew McIntyre Defeats Dolph Ziggler to Retain His Title, Sasha Banks Walks Out With Raw Women’s Championship Belt (View Pics)

Samoa Joe in a video interview asked Christian about his condition. Christian revealed that he is still feeling the pain of his injury and believe that Randy Orton will be taken out soon. Ruby Riot yet came up with second successive victory on Raw as she defeated Peyton Royce. We saw the return of Mustafa Ali who teamed up with Cedric Alexander and Ricochet to defeat MVP, Bobby Lashley and Shelton Benjamin.  R-Truth lost his 24x7 championship belt to Shelton Benjamin. Now let us take a look at some amazing pictures from this past week Raw.

@randyorton told you. He told all of you. #WWERaw

@dmcintyrewwe grants @heelziggler a rematch and this time he gets to pick the stipulation! #WWERaw

@stephaniemcmahon has declared that @sashabankswwe is NOT the rightful #WWERaw Women’s Champion! She’ll have the chance to EARN the title, next week in a rematch against @wwe_asuka!

Drew McIntyre accepts Dolph Ziggler challenge for WWE Title rematch, however, the Scottish Psychopath said that he will decide the stipulation just before the match. Seth Rollins after injuring Rey Mysterio at Extreme Rules 2020 and emerging victorious there, took out Aleister Black this week on Raw. Monday Night Messiah stomped Black's arm on the ringside staircase and prior to the match, he blamed Rey Mysterio for bringing the evil out of him. Meanwhile, Rey Mysterio is severely injured as his eyes were brutally damaged by Rollins at Extreme Rules 2020.

(The above story first appeared on LatestLY on Jul 21, 2020 11:57 AM IST. For more news and updates on politics, world, sports, entertainment and lifestyle, log on to our website latestly.com).