With an aim to celebrate the competitive spirit of athletes and fans, Apple has launched the International Collection bands for Apple Watch. 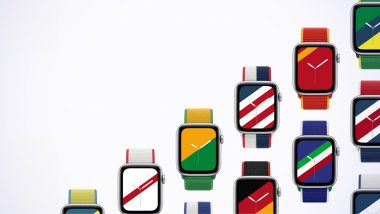 San Francisco: With an aim to celebrate the competitive spirit of athletes and fans, Apple has launched the International Collection bands for Apple Watch. The collection features a 22 limited-edition Sport Loop bands with colourful designs that represent those nations across the globe, the company said in a statement on Tuesday. Apple Watch Series 7 Likely To Feature Double-Sided S7 Chip: Report.

The bands are available in 40mm and 44mm sizes for $49 in the US. The band packaging includes App Clip functionality to easily download the matching country's Stripes Apple Watch face. Additionally, customers can download any of the 22 watch faces from apple.com and also use Face Sharing to share with other Apple Watch users.

According to a paywalled preview of a DigiTimes report accessed by MacRumors recently, next-gen Apple Watch models will adopt double-sided System in Package (SiP) packaging from Taiwanese supplier ASE Technology. On its website, ASE Technology confirms that its double-sided technology allows for module miniaturisation, paving the way for a smaller "S7" chip. Apple Watch Series 7 models are expected to be released in September, in line with the past several generations of the device. The next Apple Watch could also feature a new flat-edged design and a new green colour option, tipster Jon Prosser said earlier.

(The above story first appeared on LatestLY on Jun 30, 2021 02:32 PM IST. For more news and updates on politics, world, sports, entertainment and lifestyle, log on to our website latestly.com).