Facebook, WhatsApp, Instagram and Messenger went down for millions of users, including in India, on Monday evening, as they were unable to send or receive messages on social media platforms. 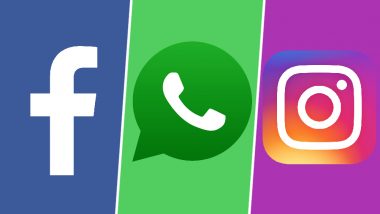 New Delhi, October 4: Facebook, WhatsApp, Instagram and Messenger went down for millions of users, including in India, on Monday evening, as they were unable to send or receive messages on social media platforms. According to DownDetector, a website that tracks WhatsApp outages, 40 per cent users were unable to download the app, 30 per cent had trouble in sending messages and 22 per cent had problems with the web version.

People took to Twitter to report the problems they were facing with Facebook family apps, including posting memes and GIFs. "Sorry, something went wrong. We're working on it and we'll get it fixed as soon as we can," a message on the Facebook website read. Facebook, WhatsApp And Instagram Down: Social Media Apps Suffer Global Outage.

"Instagram down, Facebook down, WhatsApp down. You know who's in-charge now?" another user posted. In April, Facebook and Instagram went down for millions of users for a couple of hours in various parts of the world. The outage was the second in less than a month for the social networking giant.

People took to DownDetector as they were welcomed with "sorry something went wrong" error message from Facebook and Instagram. The outage appeared to affect Facebook's internal websites as well, famed developer Jane Wong noted in a tweet.

(The above story first appeared on LatestLY on Oct 04, 2021 10:03 PM IST. For more news and updates on politics, world, sports, entertainment and lifestyle, log on to our website latestly.com).