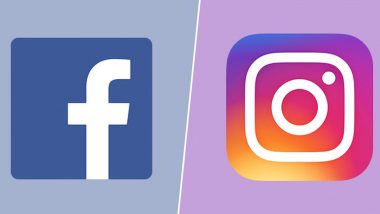 New Delhi, October 4: Several social media apps including Facebook, Instagram and WhatsApp were down on Monday evening. The three digital platforms suffered outage. Several users around the globe reported that they were facing issues while accessing the digital platforms. Notably, all these platforms are owned by Facebook.

The users of the app took to Twitter to share their experiences while using the social media app, photo and video sharing app and the message app as they suffered global outage on Monday. It is common for users to run towards Twitter for checking whether the apps are down are not. Facebook, Instagram And WhatsApp Down: Social Media, Photo Sharing And Instant Messaging Apps Suffer Outage; Users Flood Twitter With Funny Memes And Jokes.

"We’re aware that some people are experiencing issues with WhatsApp at the moment. We’re working to get things back to normal and will send an update here as soon as possible." WhatsApp said as reported by news agency ANI.

(The above story first appeared on LatestLY on Oct 04, 2021 09:54 PM IST. For more news and updates on politics, world, sports, entertainment and lifestyle, log on to our website latestly.com).