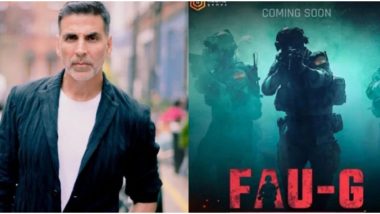 The court was approached by private companies GOQii Technologies Private Limited and Studio nCore Private Limited who claimed that they were caused great hardship by the alleged defamatory messages that were being posted on various social media sites including Google, Facebook YouTube and Twitter. Their plea also finds mention of GOQii Technologies' former CEO, Vishal Gondal and ambassador Akshay Kumar who too had to bear a brunt of these defamatory messages. What is FAU-G? Know Everything About 'Fearless and United: Guards' Multiplayer Game, India's 'Replacement' For Banned Chinese App PUBG!

Post the civil court's verdict, the companies released a statement saying that if any “miscreant or anti-social element disseminates any false tweets, videos, and/or messages on any social media platforms against them, Kumar, Gondal or any of their directors, investors, employees or representatives, they shall be liable for committing contempt of court." The online game was announced as the replacement for PUBG after it was named among the Chinese apps banned by the Indian government.

(The above story first appeared on LatestLY on Sep 18, 2020 10:07 AM IST. For more news and updates on politics, world, sports, entertainment and lifestyle, log on to our website latestly.com).