OnePlus 6 smartphone is expected to launch in India by next month. It is also rumored that OnePlus might launch the device in China on May 5. 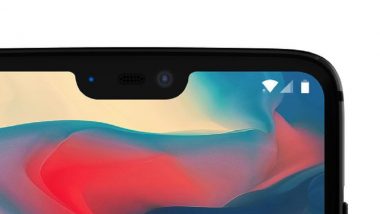 OnePlus 6 is undoubtedly one of the most anticipated smartphones in the Indian market this year. After numerous speculations and several rumors, OnePlus 6 still awaits a confirmed launch date in India which will be next-in flagship smartphone from OnePlus, a popular Chinese smartphone making company. The smartphone maker is expected to launch the new OnePlus 6 device in the domestic market by next month. Previously, it was also reported that the new OnePlus 6 handset will be sold exclusively via Amazon India. See More: OnePlus 6 'Avengers: Infinity War' Edition on the Cards as OnePlus Teams Up with Marvel

Going by the recent speculations and several rumors, the new OnePlus 6 smartphone will carry a notch design just like the iPhone X. Moreover, the company will also be offering the option to hide the notch for the buyers who do not like it. It is also believed that the smartphone will carry waterproof body however, there is no concrete details about the ratings whether it will be IP67 or IP68. Read More: OnePlus 6 Yet Again Teased Ahead of Launch Underneath OnePlus 5T; Might Get Repositioned Alert Slider - View Pic

We previously also reported that OnePlus has teamed up with Marvel Studios wherein the company might introduce OnePlus 6 ‘Avengers: Infinity War’ Special Edition. However, the launch date of the Avenger themed OnePlus 6 has not been confirmed yet. Read Also: OnePlus 6 Likely to be Amazon Exclusive in India; New Coral Blue Color, Dual Rear Camera, Dash Charge Confirmed

Likely to be offered in 3 variants - 64GB, 128GB & 256GB, the flagship model is expected to be seen in 3 colour options. Other noticeable features of the smartphone that are likely to be seen on the device are 8GB of RAM, up to 256GB of storage capacity, Qualcomm's latest Snapdragon 845 processor, repositioned Alert slider, fingerprint sensor, dual camera setup featuring 20MP+16MP sensors, USB Type-C port, a headphone jack, Android 8.1, Optic AMOLED display and more.

(The above story first appeared on LatestLY on Apr 20, 2018 10:10 AM IST. For more news and updates on politics, world, sports, entertainment and lifestyle, log on to our website latestly.com).