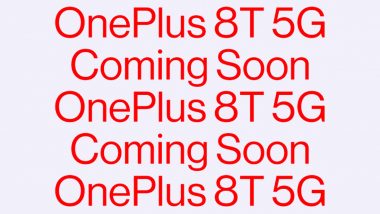 OnePlus, the Chinese smartphone manufacturer has officially teased the new OnePlus 8T. The new flagship device is expected to be launched in India next month. The phone maker took to Twitter wherein the brand revealed the first teaser on its official social media handle. The new OnePlus 8T is expected to be launched in the country on October 14, 2020. The launch of the OnePlus 8T will be an all-digital because of the pandemic. OnePlus Nord 6GB Variant Online Sale on September 21, 2020 via Amazon.in.

Previously, the smartphone was expected to break covers this month. However, there is a slight delay because of the aftereffects caused by COVID-19 outbreak that may have affected the production. The OnePlus 8T reportedly will feature a different camera design compared to the OnePlus 8 series. Apart from the camera module design, the handset will get a Snapdragon 865+ SoC.

We have seen plenty of leaks and rumours citing that the device will be offered in two storage options - 8GB + 128GB & 12GB + 256GB. It will run on OxygenOS 11 based on Android 11 out of the box. It is likely to sport a 6.55-inch FHD+ display with 120Hz refresh rate, making it the second phone from the brand to boast such refresh rate. Under the hood, there will be an octa-core Snapdragon 865+ SoC mated with up to 128GB of RAM and up to 256GB of onboard storage. OnePlus Q1 TV Series Now Available for Sale on Flipkart.

For photos and videos, the phone will employ a quad-camera module which is likely to repositioned on the left side instead of the centre. It will comprise of a 48MP primary lens assisted by a 16MP ultra-wide-lens along with a 5MP macro lens and a 2MP portrait camera. At the front, there could a major leap from a 16MP to a 32MP shooter. The phone is rumoured to get a 4500 mAh battery with 65W fast charging.

(The above story first appeared on LatestLY on Sep 19, 2020 09:05 PM IST. For more news and updates on politics, world, sports, entertainment and lifestyle, log on to our website latestly.com).