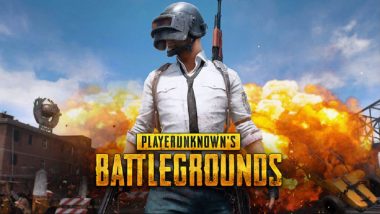 On September 2, the Indian government had banned 118 apps, including the immensely popular PlayerUnknown's Battlegrounds (PUBG) Mobile, Baidu and several VPNs that allowed access to TikTok that was earlier banned. Subsequently, the game was removed from both Google Play Store and Apple App Store. The action came after the Chinese incursion attempts in Indian territory at Pangong Tso in eastern Ladakh. Is PUBG a Chinese App? Here's Everything You Need to About Developers of PlayerUnknown's Battlegrounds Gaming App Banned in India.

Despite the ban order, some versions of PUBG Mobile were working in India. But, from October 30 onwards, the games will no longer be available in India. Tencent Games said on Facebook that it "deeply regrets this outcome" and thanked PUBG Mobile and PUBG Mobile Lite fans for their support in India.

"To comply with the interim order of the Ministry of Electronics and Information Technology dated September 2, 2020, Tencent Games will terminate all service and access for users in India to PUBG MOBILE Nordic Map: Livik and PUBG MOBILE Lite (together, “PUBG Mobile”) on October 30, 2020," it said. "Protecting user data has always been a top priority and we have always complied with applicable data protection laws and regulations in India. All users' gameplay information is processed in a transparent manner as disclosed in our privacy policy," it added. 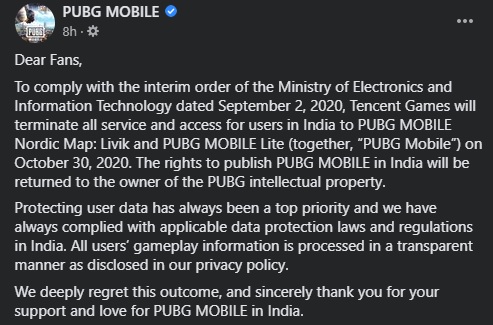 PUBG Mobile is the mobile version PUBG, an intellectual property owned and developed by PUBG Corporation, a South Korean gaming company. After PUBG became popular, Tencent, a Chinese conglomerate, had joined hands with the company to market the product in China and started handling a large portion of its distribution in other countries, including in India.

Following the Indian government's ban, PUBG Corporation said it has made the decision to no longer authorize the PUBG Mobile franchise to Tencent Games in India, opening the possibility of the ban being lifted. But, it is now confirmed that the game won't make a comeback in India at least for now.

(The above story first appeared on LatestLY on Oct 30, 2020 08:10 AM IST. For more news and updates on politics, world, sports, entertainment and lifestyle, log on to our website latestly.com).