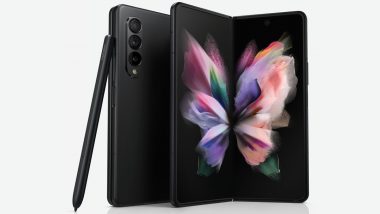 The latest pricing info comes from a post on the South Korean forum Naver Blog and corroborates earlier rumours of a 20 per cent price cut compared to the previous generation of Samsung foldables. The report also mentions that Samsung sees this year's folding duo as mass popularisers for the folding form factors.

The Verge reported that S Pen Pro's support for the Z Fold 3 isn't a major surprise -- the company has been hinting toward some sort of S Pen support for the foldable for some time. The stylus, which doesn't have a release date but is set to hit this year, is also likely to support the S21 Ultra, the Note 20 lineup and more.

A recent report said that the Galaxy Z Fold 3 will feature an under-display camera and support the S-Pen stylus. Its next clamshell foldable Galaxy Z Flip3 is expected to have a bigger outer display. The Galaxy Z Flip 3 is expected to feature a larger external display of 1.83 inches. It has a dual-camera system, which reportedly includes a 12MP main snapper and a 12MP ultrawide snapper.

(The above story first appeared on LatestLY on Jul 13, 2021 01:41 PM IST. For more news and updates on politics, world, sports, entertainment and lifestyle, log on to our website latestly.com).