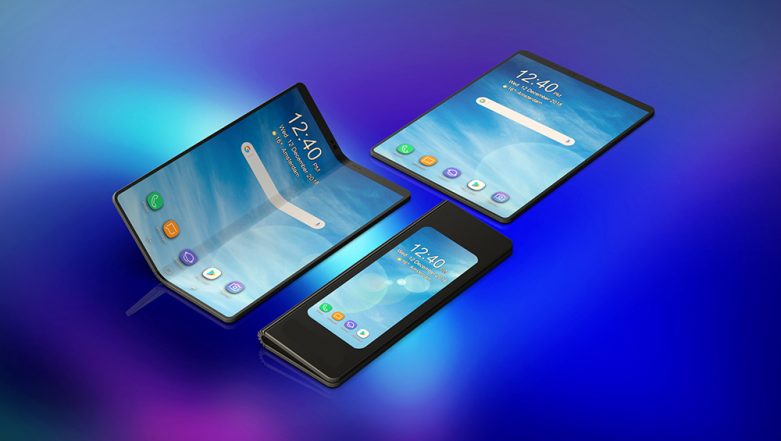 Samsung, a leading technology giant showcased its first ever foldable smartphone – Galaxy F at the Samsung Developer Conference (SDC) 2018. The phone is dubbed as Galaxy F wherein F may stand as Fold. Ever since the company revealed the foldable phone, the speculations about the pricing and specification have become quite common. As per the report from a research agency, it is believed that Samsung Galaxy F will carry two separate batteries providing juice to the two displays. Samsung Galaxy S10 Smartphone Alleged First Live Images Leaked Online.

The report also highlighted that the combined battery backup on the foldable phone will be around 5000 mAh to 6000 mAh. Another report from market claim that the Samsung Galaxy F will sport dual camera module at the rear comprising of 12MP sensors each. However, the front camera will be an 8MP shooter. According to Jun Lim, research analyst at CGS-CIMB Research, this information has been revealed at suppliers. Samsung Galaxy S10 Flagship Smartphone Likely To Be Launched on February 20, 2019; Could Be Priced Up To $1765.

The smartphone is expected to be powered by in-house developed Exynos 9820 or Qualcomm Snapdragon 855 that could be clubbed with 8GB of RAM and 128GB of storage memory. Market reports also hint that the company will be introducing its first foldable phone in more than one storage options. Samsung Galaxy A8s With Snapdragon 710 SoC is World’s First In-display Camera Smartphone.

The company has already revealed that the upcoming Samsung Galaxy foldable phone will feature 7.3-inch display screen with 1536x2152 pixels of resolution and an aspect ratio of 4.2:3. When folded, the display screen of the smartphone measures 4.58-inch screen with aspect ratio of 21:9 and resolution of 840x1960. Coming to the price point, the South Korean tech giant is expected to price the foldable phone around $1800.