Asteroid Bigger Than Empire State Building to Fly Past Earth on January 17, Is It Dangerous? Here’s What You Should Know About the Space Rock

A space rock bigger than the New York’s Empire State Building is slated to approach our planet on January 17. Is it dangerous? In this article, we bring you everything to know about the asteroid, approaching Earth. 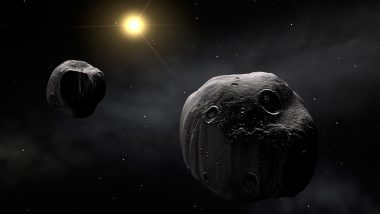 Asteroids are space rocks, minor planets inside the solar system. Large asteroids are referred to as planetoids. Millions of asteroids exist, and many have safely flown past the planet in the past years. Last year, on Christmas day, a space rock bigger than the Statue of Liberty zoomed past our planet, safely. Again, the start of 2021 saw not one, but five asteroids fly by Earth in one day, without causing any harm. Now, a space rock bigger than the New York’s Empire State Building is slated to approach our planet on January 17. Is it dangerous? In this article, we bring you everything to know about the asteroid, approaching Earth.

In the past years, many asteroids fly past our planet, and some even increased fear among citizens of creating potential harm. However, the space rock, dubbed 65717 (1993 BX3) will fly past Earth safely on January 17 at 3:49 am ET, 2:19 pm IST. When the space rock flies by, it will be travelling at a staggering 3.6 kilometres per second, or 13,000 kilometres per hour. The average asteroid travels at a speed of anywhere between 11 km per second and 72 km per second.

NASA’s Center for Near-Earth Studies (CNEOS) noted that the asteroid would come within around 4.4 million miles of our planet, which is equal to roughly eighteen times the average distance between Earth and the Moon—quite a safer distance. The space rock was first spotted in 1992 and is estimated to measure up to 1,345 feet in diameter, slightly larger than the Empire State Building, which stands at 1,250 feet high.

NASA has described asteroid 65717 (1993 BX3) as a 'Near-Earth Object' (NEO), which allows NASA to study the history of the solar system. NEOs are small solar system body whose orbit brings it to proximity with Earth. There are currently about 25,000 known NEOs. But according to NASA, none of them have a significant risk of striking Earth in the next century or so.

(The above story first appeared on LatestLY on Jan 16, 2021 05:00 PM IST. For more news and updates on politics, world, sports, entertainment and lifestyle, log on to our website latestly.com).