It is believed that the snails reached Kerala through imported wood from Africa. 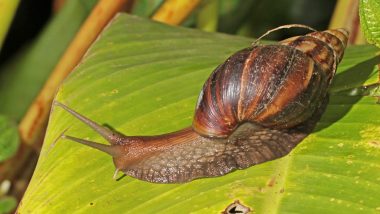 Come monsoon and slowly Giant African Snails begin to crawl crawls into homes in different parts of Kerala. They have become a regular visitor in monsoon but residents of regions affected by 'snail menace' are not very fond of these creatures. From kitchens to toilets, they find a way into every house in these places. Some of the areas where  Giant African Snails are common are Pathanamthitta, Ernakulam, Thiruvananthapuram and Muzhuppilangad and Parassinikadavu in Kannur. Locals say that the population of the snails have increased double fold in recent years.

It is believed that the snails reached Kerala through imported wood from Africa. They feed on leaves that sprout during rain and in the summer, the snails generally stay under leaves fallen from trees. Their eggs hatch during the rains and their number rises immediately irking locals. While they are a menace as they enter homes, these gastropods are harmless. But locals want these snails to leave their homes at the earliest. Scientists Successfully Transfer Memory From One Snail to Another.

Meanwhile, it has also been reported that snails were brought to the southern state from Singapore for research purposes at the Kerala Forest Research Institute (KFRI). But the project did not take off due to personal reasons and researchers simply left them. These snails initially arrived in Palakkad causing frustration among people and then spread to different districts in the state. While the local administration in Palakkad resorted to various measures to get rid of it, it was abandoned due to lack of funds. Today, the Giant African Snail or Achatina Fulica have spread to 12 out of Kerala's 14 districts. Monsoon Hits Kerala Coast; Red Alert Issued in Districts of Thrissur, Ernakulam, Malappuram and Kozhikode.

An ongoing project to get rid off the snails in a panchayat in Ranni was abandoned due to floods last year. The International Union for Conservation of Nature (IUCN), Giant African Snail (Achatina fulica) is considered one of 100 most invasive species in the world.

(The above story first appeared on LatestLY on Jun 12, 2019 12:34 PM IST. For more news and updates on politics, world, sports, entertainment and lifestyle, log on to our website latestly.com).