How to Watch Asteroid 2020 SW? Here’s Everything to Know About the Space Rock That Will Fly by Earth Closer Than Our Satellites 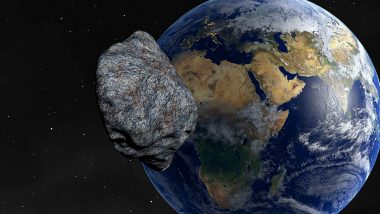 Asteroids swing by Earth all the time. And this year, there has been a lot of occurrences when the space rocks made close approaches leaving astronauts fear if at all any of the asteroid collide with the planet. Thankfully, they fly past safely. Now another space rock, named Asteroid 2020 SW is set to fly by Earth, closer than our satellites. The asteroid which was discovered last week will stroll past the planet on September 24, 2020. However, scientists noted that the asteroid would zip safely by and go on its merry way. Can you watch this space event? You do not really get a lot of chances to witness the asteroids live only as they fly by. But in this case, you do. You can catch the live streaming of Asteroid 2020 SW from your home.

As we said, the year has been full of exciting close asteroid approaches, and 2020 SW will get quite closer to the planet! According to the Centre for Near-Earth Object Studies (CNEOS) at the Jet Propulsion Laboratory in Pasadena, California, the asteroid is not expected to collide with Earth, but it will get close. NASA stated that the object would fly just 13,000 miles above the Earth’s surface. That is closer than the artificial objects that are in orbit around our planet, and power GPS, television satellites and more. While close asteroid approaches trigger alarmist headlines, there is nothing to worry for this latest encounter, and you can even watch its approach. Asteroid 2018VP1: NASA Data Shows Space Rock Heading Towards Earth and It Has 0.41% Chance to Hit the Planet, Should You Be Worried?

How and Where to Watch Asteroid 2020 SW?

Not all asteroid approaches can be live-streamed. Astronomy lovers do not get always get an opportunity to watch such events. But the near-Earth asteroid 2020 SW can be watched live. You can catch its approach to our planet through a live feed from the Virtual Telescope Project on September 23, at 3:00 PM Pacific Time (3:30 AM IST, September 24). To watch the live streaming of Asteroid 2020 SW approaching the planet, you can click HERE.

The exact size of 2020 SW is unclear. But it is estimated to be about 14 to 32 feet in diameter. After it fly past Earth on September 24, the next time it is expected to approach the planet, nearly a decade later, June 3, 2029. The next asteroid moment is slated to occur in November, right before US election.

(The above story first appeared on LatestLY on Sep 23, 2020 07:06 PM IST. For more news and updates on politics, world, sports, entertainment and lifestyle, log on to our website latestly.com).