Scientists at the International Advanced Research Centre for Powder Metallurgy and News Materials (ARCI), an autonomous R&D Centre of the Department of Science and Technology, have synthesized platinum-based electrocatalyst. 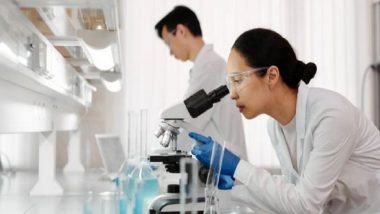 Ambitious targets have been set to harness renewable energy. With the view to provide an essential boost to this area of interest, Indian scientists have indigenously developed platinum-based electrocatalyst for use in fuel cells through an efficient procedure. In comparison to the commercially available electrocatalyst, the indigenously developed electrocatalyst could enhance the lifetime of the fuel cell stack performance. But before indulging in the research any further, let us first understand – what fuel cells are.

What Are Fuel Cells?

Fuel cells are electrochemical devices that produce electricity and heat from fuel and oxygen. Unlike conventional engines, fuel cells provide a clean form of energy with electricity, heat and water being the only products and by-products. Fuel cells offer a variety of applications and have the capacity to power systems as huge as a power plant or as small as a laptop.

Fuel cells can be understood as batteries, but unlike batteries they do not run down or need recharging. A fuel cell generates electricity from an electrochemical reaction. As long as fuel is supplied, they provide heat and electricity. Organs Donated From COVID-19 Positive Fatalities Are Safe, Says Study.

Scientists at the International Advanced Research Centre for Powder Metallurgy and News Materials (ARCI), an autonomous R&D Centre of the Department of Science and Technology, have synthesized platinum-based electrocatalyst. The key step in the synthesis lies in functionalization of carbon to enhance the carbon to platinum interaction known as strong metal substrate interaction (SMSI), thereby increasing the durability of the electrocatalyst. The efficient procedure can enhance the lifetime of the fuel stack performance.

The benefits of Fuel cells over conventional power sources, such as internal combustion or batteries, are much wider. Some of the benefits include:

1- Fuel Cells are efficient in reducing pollution caused by burning fossil fuels, for hydrogen fuelled fuel cells, the only by-product at the point of use is water.

2- If the hydrogen comes from the electrolysis of water driven by renewable energy, then using fuel cells eliminates greenhouse gasses over the whole cycle.

3- Fuel cells do not need conventional fuels such as oil or gas and can therefore, reduce economic dependence on oil producing countries, therefore, creating a greater energy security.

(The above story first appeared on LatestLY on Mar 23, 2022 10:07 PM IST. For more news and updates on politics, world, sports, entertainment and lifestyle, log on to our website latestly.com).