Two bomb blasts rocked Afghanistan's Bamiyan district on Tuesday. At least 14 people were killed in the explosions. Till now, no terror group has claimed responsibility for the attack. 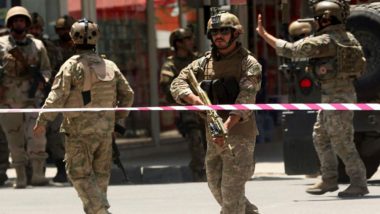 The injured were shifted to a nearby hospital. The twin explosions hit a market place of the district. A provincial government spokesman confirmed it to Xinhua News. Till now, no terror group has claimed responsibility for the attack. More details are still awaited.

The bomb blasts rocked Bamiyan district, almost hours after six Taliban terrorists were killed and four others wounded in strikes by the Afghan Air Force (AAF) n a remote area in the country's northern Balkh province. The Taliban camp used as a control and command centre was destroyed by AAF.

(The above story first appeared on LatestLY on Nov 24, 2020 08:44 PM IST. For more news and updates on politics, world, sports, entertainment and lifestyle, log on to our website latestly.com).