The announcement about the release of Taliban prisoners was made by President Ashraf Ghani on the closing day of the grand council on peace earlier in May. 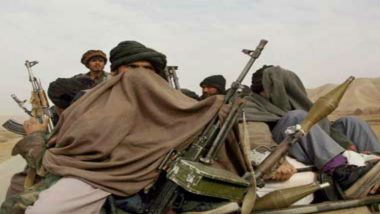 Kabul, June 11: At least 170 Taliban prisoners have been released from the Pul-e-Charkhi and another 130 jail inmates are expected to be freed on Tuesday, a move that has come when peace talks are underway to end the nearly-two decades-long civil war in Afghanistan. Tolo News reported quoting Afghan government sources that the released prisoners were imprisoned on charges of membership and cooperation with the Taliban.

The announcement about the release of Taliban prisoners was made by President Ashraf Ghani on the closing day of the grand council on peace earlier in May. The Afghan grand council ended on May 3 with a call for peace with the Taliban and a promise from Ghani to free 175 Taliban prisoners ahead of the Islamic holy week of Ramadan. Taliban Call off Talks with U.S. Officials over Disagreement on Meeting Agenda.

Again on the occasion of Eid al-Fitr, the Afghan president announced the release of 887 prisoners as part of his efforts to persuade the resurgent group to engage in intra-Afghan dialogue to end the conflict through diplomatic settlement. Meanwhile, critics have said the decision will have a possible negative impact on the country's fragile situation and that the decision has been made without wider consultations.

The move came at a time when diplomatic efforts have taken centre stage in the Afghan peace process, which has hit constant deadlocks due to persistent denial by the Taliban to engage in direct talks with the Kabul government.