China Has Caused Great Damage to US And Rest of The World, Tweets Donald Trump 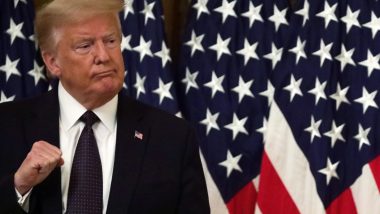 Washington, July 6: US President Donald Trump on Monday once again attacked China, saying Beijing has caused "great damage" to America and the rest of the world. Donald Trump tweeted: "China has caused great damage to the United States and the rest of the World!" While Trump wasn't specific, he was apparently attacking Beijing over the coronavirus (COVID-19) pandemic. His tweet came two days after the US reported less than 50,000 new coronavirus cases for the first time in four days. Donald Trump Calls COVID-19 'ChinaVirus', Tweets 'Cases Up Because of Greatest Testing'.

The US accounted for the world's highest number of infections and fatalities with 2,888,729 and 129,947, respectively, according to John Hopkins University. Recently, Trump called COVID-19 "plague from China" and accused Beijing of spreading it. "Plague from China, that is what it is, should have never happened but they did allow it to happen. We had just signed a brand new trade deal and the ink wasn't even dry when it came over," he said.

China has caused great damage to the United States and the rest of the World!

Trump has been attacking China over the coronavirus pandemic. On June 30, he said he was becoming angry as coronavirus was spreading across the world. "As I watch the Pandemic spread its ugly face all across the world, including the tremendous damage it has done to the USA, I become more and more angry at China (sic)," he tweeted. He had described COVID-19 as "ChinaVirus", "Chinese virus" and "gift from China".

(The above story first appeared on LatestLY on Jul 06, 2020 06:42 PM IST. For more news and updates on politics, world, sports, entertainment and lifestyle, log on to our website latestly.com).