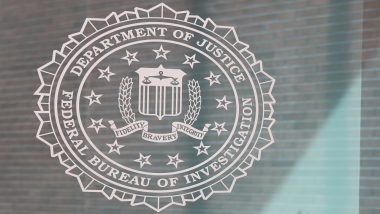 Washington DC, July 9: In a bid to secure its position as the next global superpower after the United States, China has been usurping America with a government-directed "campaign of theft and malign influence", and it has become the "greatest threat to the country's information and economic security, the Federal Bureau of Investigation (FBI) said on Tuesday.

As per South China Morning Post, FBI Director Christopher Wray, in a wide-ranging attack on Beijing's behaviour on the world stage delivered at the conservative think tank Hudson Institute, said that the counter-intelligence and economic espionage threat from China represented the "greatest long-term threat to our nation's information and intellectual property, and to our economic vitality". US Announces New Visa Restrictions on China Over Access to Tibet; Beijing Vows to Retaliate.

China's "generational fight" to usurp the US was playing out in fields ranging from local politics to industries including aviation, agriculture, robotics and healthcare, said Wray, accusing Beijing of working to compromise American institutions conducting "essential" COVID-19 research.

The charges come at a nadir in US-China relations, with tensions boiling on a number of fronts including the coronavirus pandemic, Beijing's handling of Hong Kong and treatment of each other's respective journalists. Wray revealed on Tuesday that the FBI opens a new China-related counter-intelligence investigation every 10 hours, and that around half of the bureau's approximately 5,000 open cases relate to China.

Investigations into alleged attempts to steal US-based technology by Chinese entities are underway in all of the FBI's 56 field offices.n"That is not because we are just trying to spread the work around," said Wray.n"That is because the threat is all over the country, in rural areas and big cities. It's in Fortune 100s all the way down to small start-ups," he added.

US Attorney General William Barr and Secretary of State Michael Pompeo are preparing to unveil new actions to address the threat from China in the coming weeks, said Wray, a Trump appointee who took over the FBI in 2017. Wray appealed to all in the US who believed they were being targetted by the Chinese government in such a campaign to reach out to their local FBI field office. Beyond economic espionage and extraterritorial law enforcement, Beijing was also actively interfering in US politics, said Wray, alleging that China was targetting US local officials and lawmakers with direct or indirect pressure campaigns to prevent them from travelling to Taiwan.

China has already been accused of hacking into US government systems in the past, notably the alleged infiltration of the Office of Personnel Management (OPM), acquiring sensitive data on around 20 million US federal government employees.

However, earlier this year, Chinese officials had said they have no interest in interfering in the fall elections, after Trump said in April that Beijing would do "anything they can" to thwart his re-election.