There has been a demand from the party's senior leaders and cadres to adhere to the principle of one-man one post in the party since the unification process between CPN-UML and Maoist Centre started two years ago, said Ganesh Shah, the Standing Committee member. 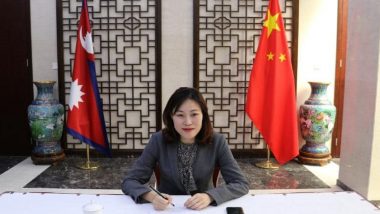 Kathmandu, July 7: Amidst mounting pressure on Prime Minister K P Sharma Oli to step down, Chinese ambassador Hou Yanqi on Tuesday intensified consultations with leaders of the ruling Nepal Communist Party to save him.

Hou met senior leaders and former prime ministers Madhav Kumar Nepal and Jhala Nath Khanal within the past 48 hours as hectic negotiations for power sharing were going on between embattled Prime Minister Oli and dissident group led by ruling party's executive chairman Pushpa Kamal Dahal 'Prachanda.' Nepal PM KP Sharma Oli, Under Mounting Pressure to Step Down, Tells His Ruling Party to 'Be Prepared For Anything'.

The political future of 68-year-old Oli, known for his pro-Beijing leanings, will be decided on Wednesday during the ruling party's Standing Committee meeting. During the 45-minute meeting with Khanal on Tuesday, Hou expressed concern over disputes that has surfaced within the ruling party and suggested to work toward resolving the differences.

Both Madhav Nepal and Khanal held discussion with the Chinese envoy regarding the latest political situation in the country, aides of the two leaders said, without giving any details.

A number of political party leaders have termed the Chinese envoy's series of meetings with the ruling party leaders as interference in Nepal's internal political affairs.

"Will the democratic republic operated through a remote control benefit Nepalese people?" former foreign minister and Rastriya Prajatantra Party chairman Kamala Thapa tweeted, in an apparent reference to the Chinese envoy's meeting with the NCP leaders.

"We strongly refute all conspiracy theories that the internal political dynamics and phenomenon here in our country, even today, are dictated by this or that foreign forces," tweeted Narayankaji Shrestha, spokesperson of the CPN, shortly after the Chinese envoy met Madhav Nepal. "Nepal, as a Sovereign Country, is able to decide itself. We object & reject any tendency to intervene in our affairs."

This is not the first time that the Chinese ambassador has intervened in Nepal's internal affairs at a time of crisis. One-and-a-half months ago, when the NCP's intra-party feud reached the climax, Hou held separate meetings with President Bhandari, Prime Minister Oli and other senior leaders including NCP's executive chairman Pushpa Kamal Dahal ‘Prachanda' and Madhav Nepal.

Meanwhile, Oli and Prachanda on Tuesday held another round of talks at PM's residence at Baluwatar to sort out their differences, ahead of the thrice postponed Standing Committee meeting of the party scheduled for Wednesday.

However, PM's press advisor Surya Thapa told PTI that no conclusion was reached at the meeting. He did not provide any details. Wednesday's Standing Committee meeting would be crucial for both the fate of Prime Ministers Oli and the NCP as well.

The two leaders had met on Monday also to sort out their differences as the party's crucial Standing Committee meeting was once again postponed till Wednesday, in a bid to provide them more time to agree on a power-sharing deal.

The differences between the two factions of the NCP -- one led by Oli and the other led by Prachanda on the issue of power-sharing -- intensified after the prime minister unilaterally decided to prorogue the budget session of Parliament on Thursday.

The Prachanda faction, backed by senior leaders and former prime ministers Madhav Nepal and Khanal, has been demanding Oli's resignation. Last week, the 45-member Standing Committee meeting was postponed twice to allow Oli and Prachanda time to iron out their differences over power-sharing.

The differences in the ruling party have reached its peak, with both the sides sticking to their respective stands. The Prachanda-led faction has asked Oli to resign from both the posts of the Prime Minister as well as the party chairman, while Oli is not ready to quit any of the two key posts.

With Oli being cornered within the party, he met main Opposition Nepali Congress president Sher Bahadur Deuba on Sunday in a bid to seek his backing to save his government in case the party splits. On Saturday, Oli met President Bhandari and held consultations.

There has been a demand from the party's senior leaders and cadres to adhere to the principle of one-man one post in the party since the unification process between CPN-UML and Maoist Centre started two years ago, said Ganesh Shah, the Standing Committee member.

If Oli sacrifices one of the two executive posts, a solution to the present crisis could be found, he said. There has been turmoil in the NCP for the past few months, but Oli tried to divert the attention of the dissident group by giving a nationalist slogan and updating the Nepalese map incorporating three strategically key Indian territories - Lipulekh, Kalapani and Limpiyadhura -- which served as means to pacify the internal tussle for some time.

However, the turmoil again surfaced since last week, after Oli accused the dissident groups led by Prachanda of hatching a conspiracy to remove him with the help of the southern neighbour.