New Zealand is not the first country to adopt the climate emergency declaration. In May, the United Kingdom had also adopted a similar resolve. A total of 28 countries, including Ireland, Canada, France, Austria, Spain, Japan and South Korea, had earlier adopted the declaration. 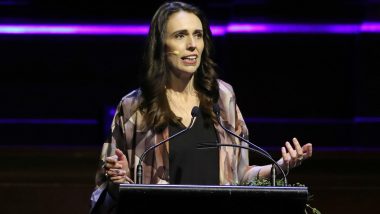 Wellington, December 2: New Zealand Prime Minister Jacinda Ardern on Wednesday declared a "climate emergency", indicating her government's renewed resolve to combat the environmental crisis. The declaration, which was tabled in the National Assembly, was passed with 76 votes in favour as against 44 against her proposal.

With passage of the declaration, Ardern lauded the lawmakers crediting them of opting to remain on the "right side of history". The climate emergency is an acknowledgment of the major crisis that awaits the next generation, she added. India Has Practically Achieved Pre-2020 Climate Action Targets, Says Minister.

"It is about the country they (the next generation) will inherit. And it's about the burden of debt they will inherit unless we make sure that we demonstrate leadership on this issue," the Prime Minister told the Parliament.

What The 'Climate Emergency' Declaration Means?

New Zealand is not the first country to adopt the climate emergency declaration. In May, the United Kingdom had also adopted a similar resolve. A total of 28 countries, including  Ireland, Canada, France, Austria, Spain, Japan and South Korea, had earlier adopted the declaration. The passage of the same is being promoted by The Climate Mobilisation, a US lobby group

Along with the declaration, Ardern announced that New Zealand would be replacing the fleet of cars in government sector with electric vehicles by 2025. The overall fleet would also be reduced by 20 percent, she said. In addition to this, the government would also remove the 200 boilers installed in public sector undertakings in a phased manner. By 2025, the government is dedicated to make New Zealand a carbon-neutral country.

Critics, however, have questioned the adoption of resolution, calling it a  "publicity stunt". Ardern has been questioned over the need to adopt the resolution at a time when the government is already trailing to fulfill the commitments made in the Zero Carbon Act 2019.

"We think it’s all very well to declare an emergency but there’s no proper plan in place as to how to deal with it," National Party leader Judith Collins told Radio New Zealand.

(The above story first appeared on LatestLY on Dec 02, 2020 11:33 AM IST. For more news and updates on politics, world, sports, entertainment and lifestyle, log on to our website latestly.com).