It came one day after the death of a 78-year-old retired bricklayer from the Padua area in the nearby Veneto region, who was the first local person in Europe to die from the coronavirus. ANSA reported that the new victim was a woman. No further information was immediately available. 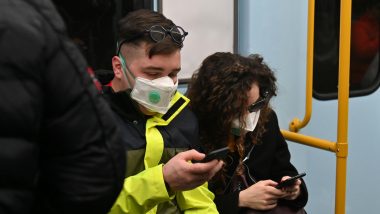 Codogno, February 22: Streets were deserted and residents warned to keep out of an emergency room on Saturday in an Italian town placed under lockdown as a second death from coronavirus sparked fears throughout the region.

"No entry" read the sign on the emergency room in the small town of Codogno with a population of 15,000 where three people have already tested positive for the virus, including one 38-year old man now on life support. On Saturday, Italian news agency ANSA reported a second death from the virus in the Lombardy region, where Codogno is located. Coronavirus in Italy: First Death In Country as Person Infected With COVID-19 Dies in Padua City.

It came one day after the death of a 78-year-old retired bricklayer from the Padua area in the nearby Veneto region, who was the first local person in Europe to die from the coronavirus. ANSA reported that the new victim was a woman. No further information was immediately available.

Italy's health minister said that the man who died on Friday, Adriano Trevisan, had been admitted to hospital 10 days earlier for an unrelated health issue.

He was one of two people in the Veneto region with the virus, where another confirmed case overnight in a 53-year old man brought that number to three, president of the Veneto region, Luca Zaia told Rai24 news.

In Lombardy, 16 other people were discovered to have caught the virus and the region took immediate measures to isolate affected areas. It was not immediately clear whether the victim on Saturday was part of that group, or a new case. In Rome, three people are being treated in isolation for the virus.

At Codogno's centre, only a bakery and a pharmacy were open, while other shops posted signs saying they were closed due to a local ordinance.

At the civic hospital, there was very little movement early Saturday other than nurses and other workers finishing their night shifts.

Those who have tested positive for the virus in Codogno include the 38-year-old man's wife, who is eight months pregnant, and another man. Three others in the town have tested positive to a first novel coronavirus test and are awaiting their definitive results. Since December, COVID-19 has killed more than 2,200 people in China, the epidemic's epicentre.

Elsewhere in the world, it has killed over a dozen people and spread across some 27 countries and territories. Last Sunday, an 80-year-old Chinese tourist died from the new coronavirus in France. Coronavirus Outbreak: Iran Reports One Death Among 10 New COVID-19 Cases.

In the areas in northern Italy, over 50,000 people have been asked to stay at home while all public activities such as carnival celebrations, church masses and sporting events have been banned for up to a week. Codogno Mayor Francesco Passerini said locals were "extremely worried" about the spread of the deadly disease.

(The above story first appeared on LatestLY on Feb 22, 2020 04:04 PM IST. For more news and updates on politics, world, sports, entertainment and lifestyle, log on to our website latestly.com).