Iran's health ministry Friday reported two more deaths among 13 new cases of coronavirus in the Islamic republic, bringing the total number of deaths to four and infections to 18. 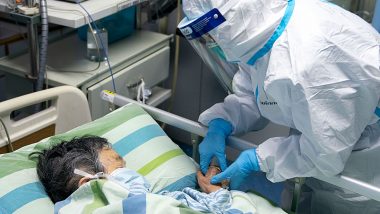 Tehran, February 21: Iran's health ministry Friday reported two more deaths among 13 new cases of coronavirus in the Islamic republic, bringing the total number of deaths to four and infections to 18.

"Thirteen new cases have been confirmed," ministry spokesman Kianoush Jahanpour said on Twitter. "Unfortunately two of them have lost their lives."

The COVID-19 outbreak first appeared in Iran on Wednesday, when officials said it killed two elderly people in the Shiite holy city of Qom, the first confirmed deaths from the disease in the Middle East. COVID-19 Outbreak: 59 Hong Kong Police Quarantined After Meal with Coronavirus colleague.

The newly reported cases included "seven in Qom, four in Tehran, and two in Gilan" on the Caspian Sea coast, Jahanpour tweeted.

"Most of the cases are still either Qom residents" or were people who had come from Qom to other provinces "in recent days and weeks", he added.

The official did not say anything about the suspected source of the outbreak in the Islamic republic.

He added that Iran had so far received from the World Health Organization four shipments of medical kits used to detect COVID-19.

Qom is a centre for Islamic studies and tourists, attracting scholars from Iran and beyond.

However, a government official said the first two people who died of the disease had not left Iran.

Following the announcement of those deaths, Iraq on Thursday clamped down on travel to and from the Islamic republic.

The health ministry in Baghdad said people from Iran had been barred from entering Iraq "until further notice".

Kuwait's national carrier Kuwait Airways also announced it would suspend all of its flights to Iran.

Iran was holding a parliamentary election on Friday, with state media saying that the coronavirus had not been able to dampen "the revolutionary zeal of Qom's people" to turn out to vote.

(The above story first appeared on LatestLY on Feb 21, 2020 04:57 PM IST. For more news and updates on politics, world, sports, entertainment and lifestyle, log on to our website latestly.com).