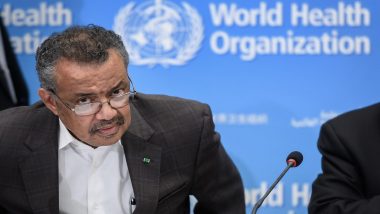 Geneva, July 30: World Health Organisation (WHO) Secretary General Tedros Adhanom Ghebreyesus blamed a callous approach by the young population in several nations for the recent spikes in coronavirus cases. The numbers have shot up in a number of countries, over the past few weeks, due to young people lowering their guard, the WHO chief claimed.

Ghebreyesus, in his statement to the press on Thursday, reiterated that young people are "not invincible to the virus". The head of the global health body had, in earlier briefings as well, said that COVID-19 can infect the younger population as well and may prove to be fatal in some cases. 'Herd Immunity Against COVID-19 Not an Option Before Country of India's Size'

"The recent spikes have been driven by young people letting down their guard in the northern hemisphere summer," he was reported as saying. With the onset of summer months, gatherings at beaches and nightclubs have resumed in several European nations - where the season is considered to be a period of vacations.

The WHO had, in April, issued a similar warning for beach goers in United States' Miami. An alleged lackadaisical lockdown imposed by the administration had then led to gatherings at the beaches, which were linked to a fatal spree of infections in the city.

Across the world, the global tally of COVID-19 cases surged past 17 million mark today. Half of the numbers were added in the past six weeks, which signals a rapid acceleration in the infection rate. Africa is feared to emerged as the next hotspot of virus, warn experts.

The worldwide death toll stood at over 672,000, with the United States accounting for 154,400 out of the total fatalities. The country continues to remain as the worst-affected country due to the pandemic as the overall case count has crossed the 4.5 million-mark.

(The above story first appeared on LatestLY on Jul 30, 2020 09:54 PM IST. For more news and updates on politics, world, sports, entertainment and lifestyle, log on to our website latestly.com).