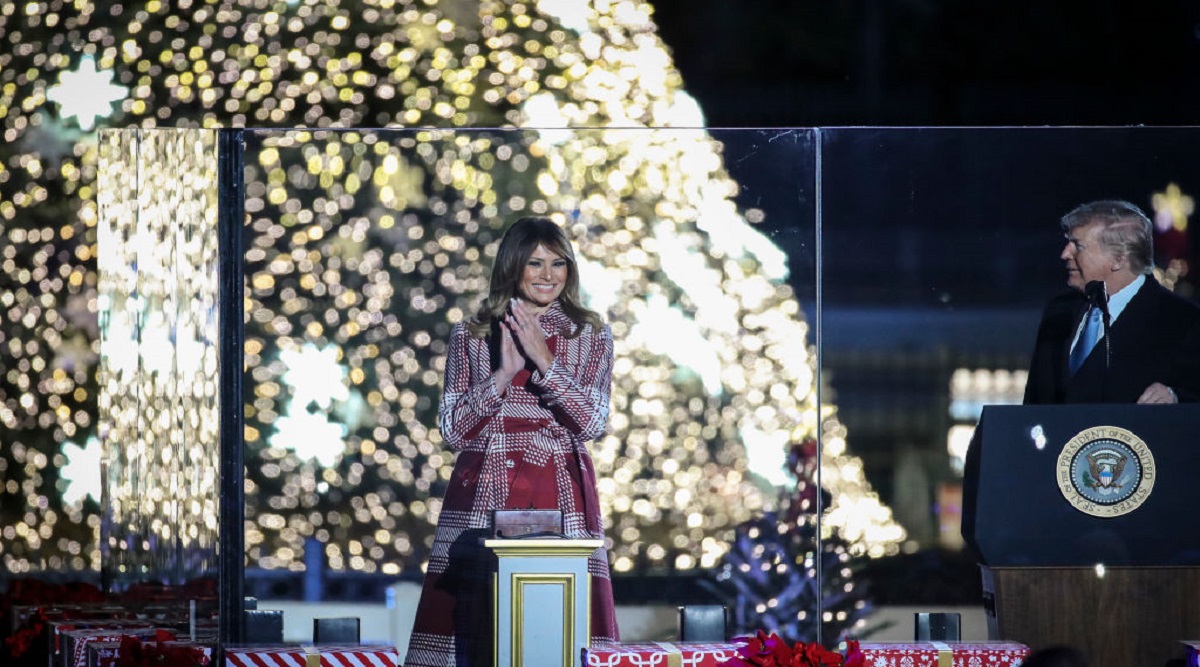 Washington, December 6: US President Donald Trump and First Lady Melania Trump participated in the National Christmas Tree lighting ceremony, which is nearly a century-old White House tradition. Formally kicking off the Christmas celebrations across the country on Thursday, the First Lady lighted the 30-foot Colorado blue spruce tree from Palmyra in Pennsylvania.

Fifty-six smaller trees surrounding the National Christmas Tree were also lighted. These trees featured one-of-a-kind ornaments, representing every US state, territory and the District of Columbia. "On behalf of Melania and our entire family, Merry Christmas and God bless you all," Trump told a gathering of hundreds of people who assembled near the Ellipse just outside the White House to witness the annual event. Donald Trump Impeachment Inquiry Drafted, Here's the List of US Presidents Who Have Been Impeached.

The ceremony dated back to 1923 when the then president Calvin Coolidge walked from the White House to the Ellipse to light a 48-foot fir tree decorated with 2,500 electric bulbs in red, white and green, as a local choir and a "quartet" from the US Marine Band performed.

"Later that night, African-American community centres held an outdoor worship service on these grounds. And during that service, the Washington Monument was illuminated with a beautiful cross, a powerful reminder of the meaning of Christmas," Trump said recounting a bit of history about the ceremony.

"More than 2,000 years ago, a brilliant star shone in the East. Wise men travelled far, far, afield. I mean, they were a long distance away. And they came and they stood with us under the star, where they found the Holy Family in Bethlehem. As the Bible tells us, when the wise men had come into the house, they saw the young child with Mary, his mother, and fell down and worshipped him," he said, reading from prepared remarks.

Trump said Jesus Christ inspires us to love one another with hearts full of generosity and grace. He thanked individuals who perform community service for others, veterans, military members and first responders.

"At Christmas, we remember this eternal truth: every person is a beloved child of God. As one grateful nation, we praise the joy of family, the blessings of freedom and the miracle of Christmas," the US president said.